The Market Has All It Needs to Rally For Another Week. Look for Resistance at SPY 130

Yesterday, the market got a little nervous when the ECB said it would not step up sovereign debt purchases. Italy has many auctions planned in the next few weeks and the threat of an interest-rate spike exists. The overnight news has been well received and Eurocrats were united.

All of the Euro Zone leaders agreed that fiscal policies need to be added to the treaty. The UK was the only exception and they were opposed to the idea of taxes and financial transactions. Consequently, the EU will move on without England.

We don’t have any details on what the budget guidelines might look like or how they will be enforced. Politicians will go on holiday and they will spend the next few months working on the specifics. They hope to amend the treaty in March 2012. This will give the market plenty of time to stew over the solution.

For now, the US has granted the ECB unlimited access to dollars. The ECB has granted European banks unlimited access to three-year funds. This might solve the liquidity crunch, but it doesn’t solve long-term issues. European banks are laden with toxic assets and they are still expected to support sovereign debt auctions. This is the ECB’s roundabout way of solving the problem.

The US is essentially backing the EU. If the ECB actively engages in swaps, US taxpayers are investing in Eurodollars. Republicans want to pull the $100 billion credit line that the US has with the IMF. They don’t like the idea of using the funds to bailout developed nations (that was not the intended function of the IMF). If Americans knew the extent of our participation in Europe, they would protest.

In coming months, EU members that are “underwater” will oppose some of the financial guidelines. No one likes to be policed and the new rules will force immediate pain upon PIIGS citizens. The consensus we see today will weaken and fear will return.

Entitlement reform is the key and politicians can’t pull the trigger. Regardless of spending cuts, these enormous obligations will drain the EU/US/Japan. Europe is in a recession and tax receipts will dwindle in 2012. This will further increase budget deficits.

From a trading perspective, the market likes the outcome. The ECB lowered interest rates by .25% yesterday and initial jobless claims fell to 381,000, the best level in nine months. This morning we learned that China’s CPI fell to 4.2%. This is a dramatic improvement and it might pave the way for easing. The market has all it needs to sustain a rally for the next week.

Stocks will grind higher and they will hit heavy resistance at SPY 130. I reeled in some of my put credit spreads yesterday. Today, I am looking for a quick trade and I am buying in the money calls on strong stocks. I’m keeping my size very small and I plan to be out early next week. The high delta will allow me to participate in the rally point for point.

As the market approaches resistance, I expect to see selling. Asset Managers will lighten up positions and that will keep a lid on the rally. It’s not wise to short stocks into year-end so I will very passively participate in this move. I’m much more interested in shorting the market once this euphoria wears off.

The price action looks very good today and I’m expecting the market to rally throughout the day. We might even erase yesterday’s losses. 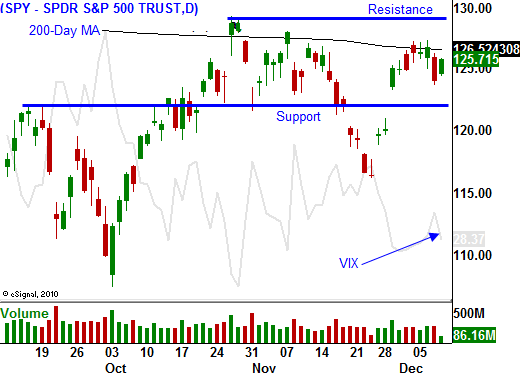