Dark Clouds Linger After EU Summit. A Close Below SPY 123 Is Bearish. We Need Follow Through

This morning, we have another random move. Thursday the market sold off, Friday it rebounded and today the S&P 500 is down 25 points in early trading. Each move has been in the 2% range. There aren’t any new developments; the market is still digesting the EU’s plan of action.

The ECB said that it would not ramp up sovereign debt purchases. However, it did give European banks unlimited access to three-year funds. Theoretically, they would borrow money at 1% and invest in sovereign debt at 7% (i.e. Italy). They could execute the carry trade and pocket an easy 6%. This maneuver would stabilize sovereign debt auctions. European banks are buried in toxic debt and they have been one of the largest sellers of European bonds.

The ECB will also broaden the collateral it will accept for loans. This is because the asset quality held by European banks has declined. Many of the banks have been downgraded.

The EU has so many new facilities in place that they are hard to keep track of. We have the ESM, SMP, EFSF and IMF (not just European). They are grasping at straws and the market does not believe there is a viable solution.

Over the weekend, Germany said that it will contribute $60 billion to the IMF. Of course, it wants other members to respond in kind. The US accounts for 17% of the IMF and I hope we don’t pony up. The solution is not more money, it is massive entitlement reform.

Eurocrats will go on holiday and the issues will fester. EU members agree that fiscal reform is needed, but the policies and enforcement still need to be hammered out. This process will take months and countries that are below the water line will object. A unanimous vote is required to amend the treaty and the March deadline is “pie-in-the-sky”.

Supposedly, no more haircuts on sovereign debt will be taken. The Greek haircuts forced bondholders to take losses, but because it was not considered a default, it screwed CDS hedgers as well. This “no haircut” promise might restore a “fair market”.

As I mentioned last summer, once yields reach a critical point, they are almost impossible to reverse. The confidence in Europe has been shaken and it could take another hit this week.

S&P will review the AAA ratings for many EU nations and it will publish the results in the next few days. It suggested that many single or double downgrades are possible. S&P said that last week’s EU conference was a step in the right direction, but that many more meetings need to be held. In the first quarter of 2012, Moody’s will review Europe’s credit ratings and downgrades should be expected then as well.

The conditions in Europe won’t change. This dark cloud will linger for many years until we have a financial crisis. If my memory serves me, 30% of S&P 500 net income is generated in Europe and it will impact earnings. More importantly, global markets are interconnected. If Europe goes through a full-blown financial crisis, Japan will be next. Once they fall, the US will be on the ropes.

If Washington DC wants to avoid a financial crisis, politicians need to dramatically increase taxes, cut discretionary spending and reform entitlement immediately. This will never happen and we’ve proved it with the debt ceiling debacle. Politicians continue to negotiate for more, not less and their actions are adding to our deficits. When they can’t agree on something small like payroll tax credits, you can forget about entitlement reform.

This is not a matter of if; it’s a matter of when. Governments will bite, scratch and claw to the bitter end to kick the can just a few more feet down the road. In 2008/2009, the Fed threw the kitchen sink at the problem and the words “unprecedented move” was used daily to describe their actions. It was not an easy market to short. Every time the market hit an air pocket, the Fed would make an announcement and spark a massive short covering rally.

The credit crisis from 2009 was not solved; it was simply moved from the private sector to the deep pockets public sector. The current price action reminds me of December 2007.

In 2007, many analysts were calling for a housing bubble. The market had plenty of swift declines, but it would snap back because there weren’t any “dead bodies”. The warning signs were there, but the S&P 500 had recently established a new all-time high in October 2007. I thought we were going to have a nice year-end rally. This is traditionally the most seasonally bullish time of year and stocks tend to grind higher in November December and January. To my surprise, stocks sold off hard in November. That move was quickly reversed and we were back on track in December. By the middle of the month, stocks started to weaken and they broke support in the last two weeks of trading. This type of price action is extremely bearish.

At the end of the year, Wall Street wants to nudge the market higher on light volume. The pattern is so strong that no one stands in the way. Portfolio returns are enhanced and bonuses are bigger. Investors end the year on a positive note and everyone wins. When this bullish pattern is broken, it is a huge warning sign. The “smart money” is selling into strength and they are trying to reduce risk while the going is good. Take a look at the charts from December 2007 and then look at the price action in 2008. Then take a look at November/December 2011.

I don’t know if the market is ready to roll over just yet, but it is showing signs of weakness. Last week’s initial claims number was good, the ECB lowered rates by .25% and inflation in China declined (paving the way for easing). These are all positive for the market. The FOMC will release a statement tomorrow and that should be “dovish”.

Stocks are making random moves in both directions and this is a dangerous trading environment. I bought back my put credit spreads last week and I had thoughts of buying a few in the money calls on strong stocks. I decided to stay on the sidelines and that was a good decision. If the SPY closes below 123, I will buy a handful of puts. I want to keep my size small.

Watch for signs of follow through. The market has to establish a direction for 3 or 4 days before I take a position. This back and forth action will chop us up. I suggest getting some Christmas shopping done while it decides what to do. There are times when the best trade is no trade. 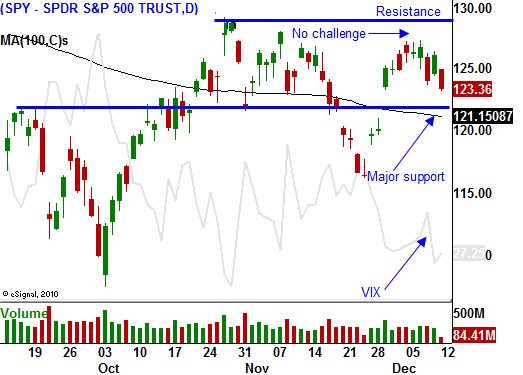