The Market Is Waiting For the S&P Downgrades This Week. Be Patient – Better Trading Soon

The market continues its roller coaster ride and stocks are reversing some of yesterday’s losses. The movement is random and the swings are huge. This is a very difficult trading environment and you should keep your trading size very small.

Traders are still digesting the news out of Europe. Last week’s summit was a step in the right direction. EU members agreed that these policies need to be added to the treaty. Without fiscal reform, interest rates will continue to spike. The ECB also granted European banks unlimited access to three-year funds. This should provide much needed liquidity and the banks are expected to participate in sovereign debt auctions.

Spain auctioned $4.9 billion worth of bills overnight and the bid to cover was 4.97. Interest rates were down slightly from previous auctions and the results were good. This was the first litmus test since the EU summit. I believe the ECB was active and they wanted to come out of the gates strong. A positive tone was set in Europe and that spilled over to our market this morning.

The euphoria from last week is already tenuous and we saw that yesterday. Eurocrats will go on holiday and the market will get nervous. When they reconvene next year we can expect delays as they try to forge fiscal policies. Many of the EU members are already “underwater” and they will be signing their own death warrant. A unanimous outcome is needed to amend the treaty and the March 2012 deadline will pass quickly without a resolution.

This week, Standard & Poor’s will be reviewing the credit ratings for all EU nations. They said that many countries could be downgraded by one notch and others might be downgraded by two notches. Moody’s will conduct a complete review in the first quarter of 2012. The market is bracing itself for downgrades and France seems to be the biggest concern. It is one of the EU cornerstones. S&P has not ruled out a credit downgrade for Germany. That would come as a major surprise and the market would decline if this happens. I believe they will maintain their credit rating, but Germany’s outlook will be reduced to negative.

In the US, politicians continue to haggle over the extension of payroll tax credits and unemployment benefits. Republicans won’t sign the bill unless it includes the approval of the XL pipeline from Canada to the Gulf of Mexico. This will add jobs and they can’t understand why this is being held up. Democrats want to pay for the extensions by taxing the rich and Republicans are digging their heels in.

The FOMC will release its statement this afternoon. I’m expecting the tone to be “dovish” and the news should be “market friendly”. The economic news the rest of the week is fairly light.

Better-than-expected news out of Europe last week should calm nerves. The Unemployment Report beat estimates, initial jobless claims have been in a steady decline, the ECB lowered interest rates, and a drop in China’s inflation rate should pave the way for further easing. These positive influences combined with year-end strength should be propelling the market.

Stocks are cheap and the fact that they can’t rally tells me that Asset Managers are selling into strength. This is a major warning sign and it does not bode well for 2012.

I still can’t justify taking a position on either side of the market. The moves are random and huge overnight gaps are common. Implied volatilities are starting to drop and that makes credit spreading difficult. The market is in “no man’s land”. It is just below major resistance and just above major support. It needs to move to one extreme or the other. Once it does that, we will have a trading opportunity. Given the recent swings, it could happen in a matter of days.

Today’s price action is very lackluster. The early bounce is starting to fade and stocks are drifting lower. If the market can’t hold SPY 125, the downside will be tested this afternoon. Traders are worried about the S&P downgrades and they will error on the side of caution.

If the SPY closes below 123, by a few puts, but keep your size small. Only add to the position if the selling continues the next day. 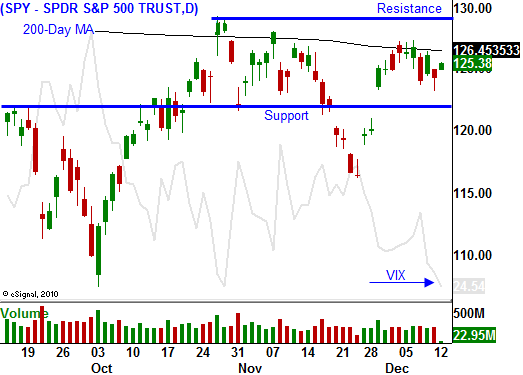