Yesterday, stocks broke below horizontal support at SPY 123. This breach should lead to a sustained round of selling. The S&P 500 opened 12 points higher, but those gains are starting to evaporate.

The news from the EU summit last week did not impress investors. Member nations all agreed that fiscal policies need to be added to the treaty, but the details won’t be hashed out for months. Rumor has it that the next summit won’t be scheduled until February 11th. That means the market will stew over the lack of progress for almost 2 months.

When they do reconvene, months of arguing will bog down the negotiation process. Half of the EU members are already underwater and any meaningful fiscal policies will translate into immediate pain. A unanimous vote is required and one small member (there will be many) can bring everything to a screeching halt. The March 2012 timeline will come and go and the market has already lost confidence.

To stop the immediate bleeding, the ECB will lend unlimited three year funds to European banks. In theory, banks will borrow from the ECB at 1% and lend to Italy (or others) at 7%. This “carry trade” will yield a nice 6% profit and it will stabilize sovereign debt auctions.

Spain held an auction last night and the bid to cover was 2.2. Interest rates were stable relative to the previous action and the maneuver seems to be working. Call me skeptical, but I believe the ECB is actively supporting these early auctions. If yields were spiking right after the summit, this “carry trade” concept would fail right out of the gate.

European banks have not raised capital since the 2009 financial crisis. They also took passive write-downs so their balance sheets are very weak. Given the backdrop in Europe, the cost of new capital was way too high so banks decided to sell assets (sovereign bonds) instead. They unloaded some of the garbage (sovereign debt) and liquidity was an issue. No one wanted to buy their inventory and that is why yields spiked. If you’ve ever tried to unload size in an ill-liquid market, you do everything in your power to avoid it in the future. I doubt banks will rush back in just because of the “carry trade”. The ECB might promise to backstop them, but no bank wants to be a bailout poster child if rates continue to rise.

As early as today, Standard & Poor’s will release its credit rating review for all of Europe. Last week’s summit made it clear that the strong will support the weak. All countries will be evaluated and most analysts expect France to be downgraded at least one notch. Germany could also be downgraded and if it is, we can expect a major market decline. I don’t believe Germany will be downgraded. Their economy is relatively strong and at worst their outlook will be lowered.

In the first quarter of 2012, Moody’s will also review the entire EU. Most of the banks have already been downgraded and the trend is established.

Overnight, the flash PMI’s were released for Europe and China. In both cases they were slightly better than expected, but they still fell below 50 indicating economic contraction. China’s stock market fell 2% last night and it is performing worse than European markets. Their market is making new multi-year lows and the global growth engine is showing signs of strain.

In the US, the news has been pretty decent. Initial claims fell to 366,000, the lowest in 3 1/2 years. I believe seasonality might be skewing the number. Empire Manufacturing and the Philly Fed also came in better than expected.

When stocks can’t rally into year-end, it is a very bearish sign. Even if the market rebounds, the price action to this point suggests that a heavy round of selling is right around the corner. Typically, Asset Managers and hedge funds “goose” the market higher on light volume in December. Investors are happy, asset management fees increase and bonuses on Wall Street are bigger. Traders won’t fight this seasonal strength unless they are worried. They sell into strength to reduce risk.

You’ve heard me compare the current price action to that of December 2007. We got the bounce and it stalled in the middle of December. Now stocks have started to roll over and support has been breached.

The market is bracing itself for European downgrades. S&P has waited this long and I believe they will release the news after the close on Friday. This is a market moving event and they want to give traders time to think about the revisions. I also don’t believe they will post the news on the eve of option expiration. S&P downgraded the US after the close on Friday August 5th.

If the market declines into the weekend, I believe the news will spark a small relief rally on Monday. Once the dust settles, traders will realize that Europe will remain in limbo for more than a month and the selling will resume.

One interesting fact about tomorrow’s option expiration is that this is the largest of the year. December options represent 45% of the open interest for all options and only 10% of December put options have been rolled out. That means Asset Managers are unprotected. They don’t believe that a major market decline will materialize between now and year-end. This sets up a very dangerous scenario and it explains why the VIX has not jumped during the recent sell-off.

I am long puts, but the recent random price movement has me nervous. I won’t add to positions unless I see follow-through. If bulls can’t get anything going by mid-day, the downside will be tested. If we close in negative territory, I will add to my put positions. At most, I will have 20% of my target short position heading into the weekend. I liked the breakdown yesterday, but I’ve been whipsawed in recent weeks. Once I see momentum, I will ramp up.
. 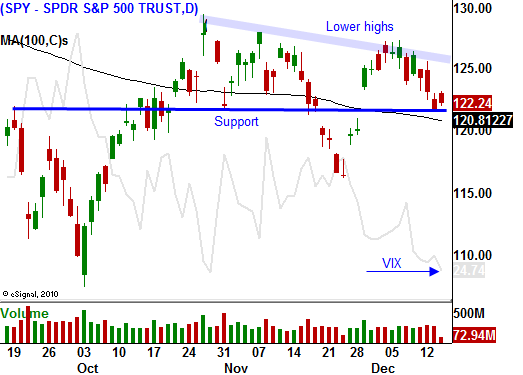