Yesterday, the market rallied early in the day and the gains evaporated by the close. Good economic releases were not enough to sustain the rally. This morning, decent bond auctions in Europe and a confidence vote in Italy sparked a small round of buying. The action will be muted today as traders wait for S&P’s credit rating review after the bell.

Initial jobless claims came in at 366,000 and that is the best reading in 3 1/2 years. The trend has been lower, but I suspect seasonal adjustments are skewing the number. Empire Manufacturing and the Philly Fed also came in better than expected. The flash PMI’s in China and Europe stabilized, but they are still below 50 (economic contraction). Next week, the economic releases will be fairly light.

The ECB has granted European banks unlimited access to three-year funds. In theory, banks will borrow at 1% and lend to sovereigns (Spain and Italy) at 7%. This maneuver would yield a nice profit and it would stabilize European bond auctions. As I mentioned yesterday, I doubt banks will rush back into this trade. They’ve had to sell assets to beef up balance sheets. In the last few months and they had an impossible time unloading sovereign debt. An article in the Financial Times supports my line of thinking.

Back in 2009, nearly 50% of the long-term funding provided by the ECB was used by banks to purchase sovereign debt. Even with the attractive spread, they don’t want to revisit the source of their current problems.

The Fed granted the ECB unlimited dollar funds. Now they are tapping into that resource. In the last week, loans on swaps jumped to $54.3 billion from $2.3 billion. At this rate, we will quickly eclipse the program’s peak level of $586 billion reached in December 2008. This spike indicates how dire the situation in Europe was getting. I’m not excited about the Fed holding a mountain of Eurodollars.

Eurocrats are about to go on holiday and rumor has it that the next EU summit won’t be scheduled until February 11th. S&P said that they would like to see another summit scheduled immediately. The market has lost confidence in Europe and now it will be asked to wait two months.

This routine of pushing back decisions has ended. The market waited for the “grand bargain” and it didn’t like the solution. Credit markets deteriorated very quickly and the EU had to schedule an emergency summit.

I don’t believe banks are going to snap up sovereign debt. Credit crisis fears will creep into the market and interest rates will start to rise. The ECB said it will not ramp up bond purchases so they won’t keep a lid on yields. The pressure will build and Eurocrats will have to move up the date for the summit.

When the market can’t rally into year-end, it is a major warning sign. Even if prices recover a little, the damage has been done.

I believe the credit downgrades after the close today will strike a nerve. Even if a single notch downgrade for France is priced in, the actual event will spark selling. Moody’s will be reviewing European credit ratings in the first quarter of 2012 and this dark cloud will loom over the market.

There is also a chance that the downgrades will be widespread and more severe than expected. Remember, S&P is bold. They were the first and only ratings agency to downgrade the US.

December options comprise 45% of the total option open interest and they expire today. The open interest in future months has not expanded and only 10% of the positions have not been “rolled”. This explains why the VIX is declining when the market has been selling off. This is very unusual and it means that Asset Managers will be unprotected Monday morning.

The SPY has broken support at 123. That resistance level should hold today.

I am long puts and I will increase my position today. If the market had been declining the last few days, I would have expected a small relief rally after S&P’s announcement. Stocks have been relatively stable and I believe that there is more room on the downside. After the news, traders will get nervous that European leaders have “checked out” for the year.

The market has been very unpredictable, so I am only taking 25% of my target position today. If I get the follow-through selling Monday morning, I will add to positions. My puts could also benefit from a spike in implied volatility if Asset Managers start to buy protection.

Keep your size small and favor the downside. 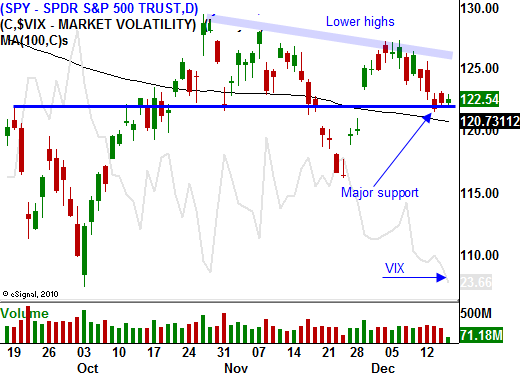