S&P Credit Rating Will Weigh On the Market This Week. Buy Puts and Keep Your Size Small

Last week, the market pulled back and it was not able to recover during the most seasonally bullish period of the year. Asset Managers are not concerned that they will miss a year-end rally and many are reducing risk.

Credit concerns in Europe are weighing on the market. After the close Friday, Moody’s downgraded Belgium’s debt by two notches. This is a substantial move. Over the weekend, Fitch joined the party and said that it will be reviewing all of the EU ratings in Q1. Fitch has Belgium, Spain, Slovenia, Italy, Ireland and Cyprus on Rating Watch Negative and said it would make a decision by the end of Jan.

Standard & Poor’s was supposed to release their European credit reviews last week. I thought they would post their findings after the close on Friday, but that didn’t happen. This looming event will keep pressure on the market. France will get downgraded by one notch and possibly two. If Germany gets downgraded, the market will tank. This is the biggest news event of the week.

European officials are still scrambling to calm nerves. The ECB will run the EFSF starting in January and that should get it up and running. European nations are working on a proposal to add $150 billion to the IMF. England does not want to participate and I don’t believe the US will contribute either. Europe wants to use IMF funds for general bailouts and that is not what it was originally intended for.

North Korea’s leader Kim Jong-Il died this weekend and that has created tension in Asia. His son started his reign by firing missiles into the ocean this morning. South Korea is on high alert and Asian stock markets traded lower on the news.

The Senate approved the extension of payroll tax credits and unemployment benefits. However, it still has to get through the House and they will be voting on it today. Rumor has it that it will get voted down. The Senate has been dismissed and a failure would mean that neither will be extended this year.

According the Wall Street Journal, the Fed is pushing to adopt Basel capital requirements. That means banks would have to increase reserves by 1 to 2 ½%. This is putting pressure on financial stocks this morning.

The economic news this week is light. Initial claims and the final revision to Q3 GDP will be released Thursday. Durable goods orders will be released on Friday and I don’t believe any of the releases will have a major impact on the market.

Last Friday, 45% of the total option open interest for all months expired. Only 10% of the options were rolled into future months and I believe Asset Managers have downside exposure. No one is buying the protection and that is why option implied volatilities are declining. Most traders don’t want to buy premium during the holiday because of time decay. Others don’t believe the market will sell off into year-end so they are waiting before they add protection.

I believe the news from the ratings agencies could be very damaging. Standard & Poor’s has been aggressive and they are still the only agency to have downgraded the US. Furthermore, they will be the first to downgrade the entire EU.

The SPY is below major support at 123 and I believe there’s a good chance for the market to sell off. Interest rates in Italy have been creeping higher and Eurocrats are on holiday. The next summit hasn’t even been scheduled and Moody’s hinted that it is not satisfied with the progress.

There is a striking similarity between the year-end trading pattern in December 2007 and 2011. Four years ago, stocks declined right into year-end and the momentum picked up after Christmas.

The trading volume will be low as we head into the holiday. If we do get a market decline, we could hit an air pocket. Asset Managers will scramble to but protection and that will fuel the move.
I am long puts and I have allocated 25% of my normal position. I am buying more puts today and by the close I will have one third of the normal position. I’m keeping my size relatively small because of the recent market whipsaws. The market has made random movements and I won’t increase my size until I see follow through. Keep your positions relatively small and favor the downside. 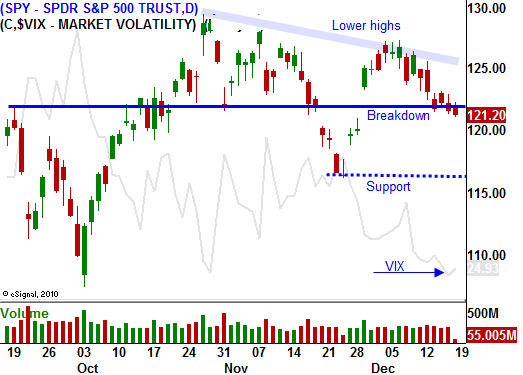