The Market Is Waiting For S&P’s Euro Credit Review. Look for Choppy Trading Until Then

Yesterday, stocks started out on the plus side and gradually weakened throughout the day. The S&P 500 finished down 16 points and this morning, it is up by about the same amount in pre-open trading. As we head into the holiday, the volume will dry up.

There isn’t much news overnight, but a decent bond auction in Spain sparked a rally in Europe. These were very short-term maturities (three-month and six-month bills) and I don’t view this as an indication of improving long-term demand.

Standard & Poor’s has still not released its credit ratings review of Europe. Those results were expected last week and the market is waiting for the news. France will probably get downgraded (largely expected) and the EFSF will lose its AAA rating.

Tomorrow we will find out how much money European banks have borrowed from the ECB. Banks have an open line of credit for 3 years and analysts estimate loans to range from €100 billion-€350 billion. The market would like to see the number come in on the high side since it means banks are more liquid and they have the ability to participate in sovereign debt auctions. The downside is that the ECB’s total assets will have reached €2.5 trillion, pushing reserve ratios to levels not seen since the 2008 financial crisis.

Today, the House will vote on the extension of payroll tax credits/unemployment benefits. The Senate approved this bill last weekend and now it looks like the House will reject it. If they don’t pass it, the news will weigh on the market. It will be one more example of how divided our nation is.

The economic news is light this week (Q3 GDP, initial claims and durable goods). These releases should not have any major market impact.

Some traders are speculating that the S&P release will be a “buy the news” event. I disagree. The market has not declined much after S&P’s announcement and I believe the downgrades will spook investors. Option implied volatilities have declined and Asset Managers have not been buying put protection (only 10% of options were rolled last week). This means any surprise would favor the downside.

I don’t see that anything has changed in Europe. We aren’t any closer to an agreement on fiscal policies and the next summit is more than a month away. I also don’t believe European banks will rush back in to buy sovereign debt. Banks did this during a similar ECB maneuver three years ago and now they are straddled with huge sovereign debt losses. The banks might be more interested if they saw bona fide fiscal reform taking place in the PIIGS. Structural issues (entitlement) have not been addressed and austerity has been fought “tooth and nail” by politicians.

In this light volume environment anything can happen so you need to keep your trading size small. The SPY is below 123 and as long as that resistance holds I will hang on to my put positions. I have one third of my normal trading size established and I am not looking to add unless S&P releases its review. If the market reacts negatively, then I will add to my positions.

The overnight news was not good enough to justify the rally on the open. If bulls can’t add to gains within the first few hours of trading, we will pullback from the highs. By mid-day, a tight range will be established and stocks will flat line. The level of conviction will be low until S&P releases its Euro credit review.

Own a few puts and be patient. 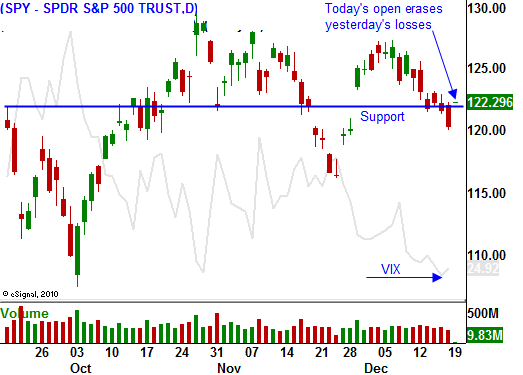