Yesterday’s Move Was Just A Short Covering Rally. Buy Puts If The SPY Trades Below 123.

This morning, we learned that European banks borrowed €498 billion from the ECB during the last two weeks. They tapped into the unlimited three-year funds provided by the central bank. European banks use the proceeds to purchase short-term Spanish bills. They borrowed from the ECB at 1% and lent the money to Spain at 2.6%. These bills will mature in six months and the default risk is low.

The €498 billion number was at the upper end of the range. Spain’s bond auction was oversubscribed and the bid to cover was nine. European markets rallied after the bond auction and that euphoria spilled over to our market.

Spain’s default risk in the next six months is very low and this was not a bold move on the part of European banks. They effectively locked in an annualized 3.2% profit. This does not mean that European banks will have a big appetite for longer-term sovereign debt. As you go out on the yield curve, the risk of default increases dramatically.

Three years ago, the ECB tried a similar maneuver. European banks gobbled up high yield sovereign debt and they have taken massive losses on those bonds this year. They will not fall into the same trap twice and I believe longer-term European bond auctions will not go well. Next year, European banks and sovereigns combined will have to refinance $2.6T in debt. That is a mountain of debt and I believe they will have to stay in short term maturities (5 years and less).

Even after yesterday’s great news, Italy’s interest rates are creeping higher today. Eurocrats have not provided any long-term solutions and they don’t plan to meet in January. The market will get nervous and it does not trust Europe’s promises.

S&P said that they would release their review of European credit ratings as soon as possible. Traders have been waiting for the news for more than a week and it could come at any time. It stated that many single downgrades are possible and there might be double downgrades. Standard & Poor’s was the first to downgrade the US and they have been very progressive. I believe the news will be worse than expected.

Once this storm cloud passes, another will loom. Moody’s and Fitch will both be reviewing European credit ratings in the New Year. Fitch said it will release the results before the end of January. The cost of capital will rise in Europe in coming days.

Earnings season will officially kick off January 9th. We are already getting some warning signs from the likes of Caterpillar, Schnitzer Steel, Red Hat and Oracle. If we fail to get a year-end rally, earnings season could weigh on the market. During the last 10 consecutive quarters, stocks have rallied into earnings season. If this pattern is broken, it would be a very bearish sign.

In today’s chart I continue to highlight the similarities between 2011 and 2007. You can see that stocks drifted lower early in December 2007 and they bounced. In the middle of December, the market had a last gasp rally that only lasted a couple of days. After that, stocks sold off into year-end.

I believe all of the good news is out of the way and the S&P review will weigh on the market. As we saw this summer, the market gets very nervous when Eurocrats go on vacation. The fiscal reform promises mean nothing and it will take many months (perhaps a year) for them to reach a “watered down” policy.

I sold my put positions yesterday when the SPY crossed above 123, and I am looking to get back in. I need to see resistance and I don’t believe the market will be able to get through SPY 125. Option premiums have not been this cheap since August and I will scale back into my put positions if the momentum stalls.
We are trading against year-end strength, keep your size small. If the SPY trades below 123, buy some puts. If the SPY closes below 123, add to the position.
.
. 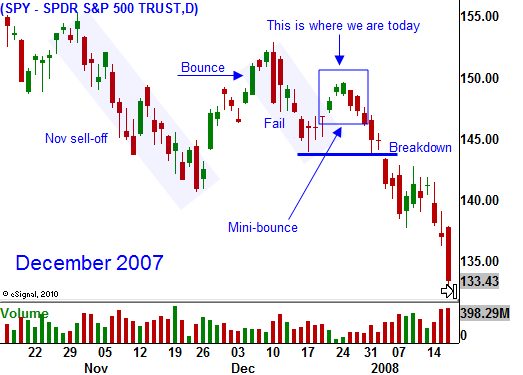 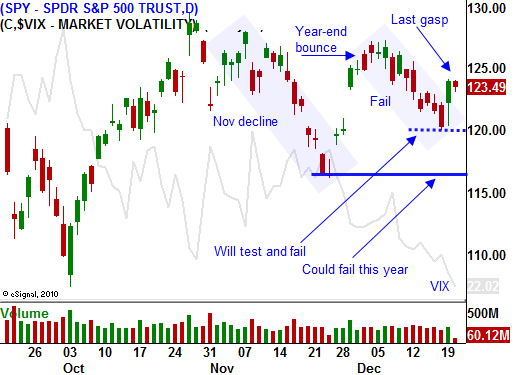