Italian Bond Auction Could Be the First Speed Bump. Wait For SPY To Breach 125 – Then Buy Puts

The markets will be pretty quiet this week as many traders extend their holiday. Stocks jumped last week when we learned that European banks borrowed €498 billion from the ECB. They used the proceeds to pay down more expensive debt, fortify balance sheets and to purchase short-term sovereign debt. This temporarily soothed nerves.

The ECB’s balance sheet has grown to a level not seen since the peak of the financial crisis in 2008. Most analysts see this as the “bazooka” they were looking for to stabilize financial conditions. From my perspective, it simply indicates how dire the credit situation had become.

European banks did not take write-downs and they did not raise equity during the financial crisis. They are sitting on mountains of toxic assets and international banks were not conducting business with them. The liquidity was drying up and central banks around the world had to extend unlimited credit lines to the ECB. Then the ECB extended unlimited three-year funds to European banks.

In theory, European banks will use the proceeds to buy sovereign debt. They purchased six month bills during Spain’s auction last week and traders got excited when the bid to cover was nine. That was nothing more than a “warm fuzzy”. European banks will stay on the short end of the yield curve where default risk is low.

The ECB did the same maneuver two years ago and European banks took advantage of the “carry trade”. They borrowed cheap funds from the ECB and use the proceeds to buy higher-yielding sovereign debt. Those bonds have decreased in value and European banks are sitting on huge losses. I don’t believe they will fall into the same trap twice and that means the ECB’s plan won’t work. Interest rates will keep creeping higher. Rates on Italy are back over 7% this morning.

This week, Italy will auction 10 year bonds (Wednesday and Thursday). I don’t believe the auctions will go well. In 2012, European banks and sovereigns will refinance $2.6 trillion in debt. Shorter term maturities will see decent demand, but anything more than a couple of years out will see limited demand at current prices.

The US has its own “house of cards” so I guess it really doesn’t matter. This reminds me of the .com bubble when Internet companies were buying each with stock swaps, not cash. One inflated value was being exchanged for another. The Fed and ECB are simply exchanging two currencies that have little intrinsic value so that they can kick the can down the road. If the Fed and the ECB did not step in a few weeks ago, we would be in the middle of a financial crisis right now.

Politicians have not addressed structural issues in Europe or in the United States. This is an election year and I’m not expecting any progress in the US. Europe will hold a summit in February and it set a target date of March for new fiscal policies. Half of the European members are “underwater” and they will never agree to strict rules. The best Europe can hope for is a watered-down solution that won’t address problems. They need a majority vote to add anything to the treaty and the opposition will be stiff.

In 2012 the market will get very nervous. We really haven’t seen much in the way of a Santa Claus rally. When stocks can’t rally into year-end, it is a bearish sign. We had a small push higher last week, but the resistance will grow as we approach SPY 130.

It’s not just Europe that we have to worry about. I’ve been reading articles about the real estate market in China and it looks like a bubble has formed. New construction is falling off dramatically and 10% of China’s economic activity is tied to residential housing. Caterpillar lowered guidance a few weeks ago and this morning, Hitachi Construction (major heavy equipment manufacturer) did the same. They feel that China will not see any growth until late in 2012.

This Thursday, HSBC will release its PMI estimates. That could be a dark cloud that hangs over the market. China will officially release its PMI over the weekend. The Shanghai is drifting lower again and it lost 2% Monday and Tuesday. Is at three-year lows and investors are heading for the exits.

The economic news in the US is light this week and it won’t be a factor.

Earnings season is approaching and for the most part the guidance has been negative. Caterpillar, Best Buy, Oracle and Intel all disappointed “the Street”. This morning, Sears (the weakest retailer) reported that sales declined 5%. It will close between 100 and 200 stores in 2012. We will be able to gauge retail sales in the next two weeks. The revenues will be decent, but the discounts have been stiff and profit margins will suffer.

Politics will also weigh on the market as Republicans and Democrats wage war. Nothing will get accomplished before the elections economic conditions will deteriorate. The market will get impatient waiting for the EU and the elections.

I predict that 2012 will be a very tough year. The “shell game” (shifting money from the Fed to the ECB to Euro banks to bankrupt sovereigns) will temporarily postpone the inevitable, but the market will eventually punish the players when deficits are not reigned in. Japan is another issue and I will closely monitor their rates.

Here’s where we stand. Stocks might still have another day or two of upside, but I am expecting it to be very contained. I believe Asset Managers will start to sell into strength. The volume will be light so they won’t be able to unload. They will replenish offers and they will sell as much as they can. When it is obvious that the market has hit resistance, the profit taking will be more pronounced and stocks will retreat.

I feel that we are very close to a top. I don’t want to be early so I will wait for the SPY to break below 125. When that happens, I will buy puts. If there is follow through I will add, especially if the SPY closes below 123.

Option implied volatilities have declined dramatically and puts are cheap. Asset Managers did not roll protection after December expiration and I believe they have downside risk exposure. That means that when the market does finally roll over, the decline will be swift. Puts prices will jump because of the decline and because of expanding implied volatilities.
Be patient and let this rally run its course. Watch for late day selling as a sign of resistance. I believe the Italian bond auction on tomorrow could be the first speed bump. 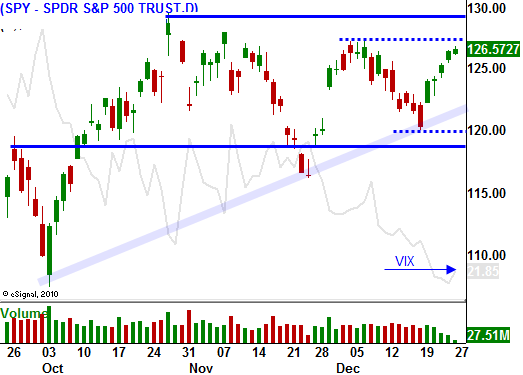