The SPY Is Below 125. Buy Puts and Add If We Close On the Lows of the Day.

The overnight news was fairly light. Italy auctioned six-month bills and the demand was good. European banks will embrace shorter-term maturities since the default risk is low. This landscape could change tomorrow.

Thursday, Italy will auction ten-year bonds. This is the first longer-term bond auction since the ECB granted unlimited three-year funds to banks. The ECB will support the auction, but I believe banks will be very passive. Interest rates will move higher and the market will get nervous.

Three years ago, the ECB provided European banks with this same type of liquidity and they plowed money into sovereign debt. Those positions have sustained huge losses this year and banks will not make the same mistake twice.

Tomorrow, HSBC will release its PMI for China. I’m expecting a relatively weak number below 50. I’ve been reading articles about the Chinese real estate market and I believe their economy could be in for a hard landing.

Retail sales might be decent, but department stores have had to slash prices and extend business hours. This means profit margins will decline.

Earnings season is right around the corner and the recent guidance from Caterpillar, Oracle, Schnitzer and Intel has been weak. I believe we’ll see nervous trading ahead of earnings season.

Standard & Poor’s and Fitch will release their review of European credit ratings in January. Many single and double downgrades are expected. Eurocrats are on holiday and the next summit has not been scheduled. The market will get very restless while conditions deteriorate.

The market is right up against major resistance and we did not get much of a Santa Claus rally. Asset Managers did not roll their put protection before December expiration and I feel they have downside risk.

I’ve been mentioning that the momentum would slow and we would start to see resistance. The S&P 500 is down 14 points and stocks have been drifting lower. The SPY has broken support at 125 and I am buying puts. If the market closes on its low I will add to the position today. If the SPY breaks below 123, I will add again.

The volume is light and this is the time to be relatively cautious. At most, I will build to half of my normal position.

The wimpy little year-end rally has run its course and I believe the next big move is down. 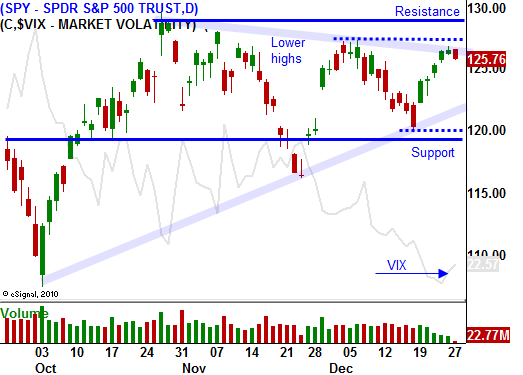