Italy’s Bond Auction Dismal Even With ECB Help. Last Trading Day of the Year Has Been Weak – Buy Put

Yesterday, stocks pulled back ahead of Italy’s 10-year bond auction. Investors were concerned that the demand would be low. This morning we learned that the bid to cover was 1.2 and yields were over 7%. The dismal results were largely priced into the market and stocks opened a bit higher.

As I’ve been mentioning, European banks will have little appetite for longer-term maturities. They fell into this trap three years ago when they borrowed money from the ECB and now they are sitting on huge losses. Yesterday, I also mentioned that the ECB would actively support Italy’s bond auction. According to Reuters, that’s exactly what happened. The ECB does not want its plan to fail right out of the gate.

Hungary tried to auction a variety of bonds from 3 to 15 years in maturity. Their yields are over 9% and they canceled the entire auction because of low demand.

According to a Wall Street Journal article this morning, European bank regulators are concerned that some banks are running out of collateral to post for the ECB tender operations. In the last three weeks European banks have borrowed almost €500 billion from the ECB. That was after collateral requirements were reduced. Banks are pledging assets of lesser quality to secure loans and they are running out of that. If the ECB has not acted a few weeks ago, I believe we would be in a financial crisis right now.

The European banks will use the loans to pay down higher interest rate debt and they will keep cash on hand to stay liquid. Some banks will also invest in short-term maturities to take advantage of the “carry trade”. Europe will find it very difficult to finance long-term debt and the average maturity will progressively decline in coming years.

We’ve seen that same trend in the United States. The average maturity on US bonds is five years. This means our country will continually have to refinance its debt. As we draw closer to the financial crisis, each bond auction will carry more weight. The market will breathe a sigh of relief and then the next auction will be scrutinized. This wave of auctions will be never-ending and eventually the house of cards will implode.

It feels like we are a few years away from that scenario, but credit conditions can change very quickly. Look at Italy’s 10-year yield curve and you can see that concerns were contained just 6 months ago. In November, we saw interest rates spike across all of Europe.

I see many dark clouds on the horizon. We did not get a Santa Claus rally and during the third year of a presidential term, that is a very bearish sign. In January, we won’t have seasonal strength to propel the market. Earnings guidance has been very cautious and retail sales don’t look very encouraging. Interest rates in Europe stabilized, but they have not declined on longer-term maturities. The ECB has increased its balance sheet to levels not seen since the financial crisis in 2008. In a few weeks, Standard & Poor’s and Fitch will release their review of European credit ratings. Many downgrades are expected. China’s economy has been softening and it could be in for a hard landing. Its PMI will be released over the weekend (HSBC will released its PMI tonight).

Last week, 45% of the open interest for all options was in December. Only 10% of those options were rolled out. That means Asset Managers are relatively unprotected. Option implied volatilities have declined and puts are cheap.

I believe we will see a swift move lower in coming days and I am long puts. During the last seven years, the market has declined 6 times on the final trading day. I would like to see this early rally stall. Asset Managers will start to reduce risk and they will sell into strength. I believe the upside will be contained.

This is a five week expiration cycle and there is still plenty of time for action. I suggest buying Jan puts today when the market hits resistance. 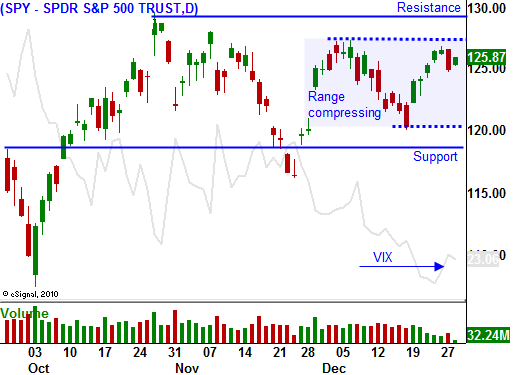