Yesterday’s rally felt a bit “fluffy”. China’s PMI came in better than expected, but it was still weak. Their stock market has been closed and when it reopened last night, it declined 1.3%. Furthermore, Europe’s PMI fell for the fifth straight month. The 26 point S&P 500 rally could not be justified by the news. Throughout the day, stocks drifted lower.

Overnight, China’s Finance Minister said that he sees a relatively difficult first quarter. He sees downside pressure on the economy, weakening external demand and rising costs. Many analysts expected China to lower bank reserve requirements last weekend and they did not.

Germany is considered the strongest country in the EU and it held an auction this morning. They wanted to auction €5 billion worth of debt and they only sold €4 billion worth. The bid to cover was a disappointing 1.3. France will auction long-term bonds overnight (€8 billion) and the results could be dismal. Hungary canceled its bond auction when the demand across all maturities was tiny.

The ECB granted European banks unlimited access to three-year funds. In theory, banks would use the loans to purchase sovereign debt. This maneuver was attempted three years ago and European banks gobbled up PIIGS bonds. Now they are suffering huge losses. European banks will not fall into the same trap twice. In a few weeks, they will have to provide regulators with their capital raising plans. They are trying to beef up balance sheets, not add risk.

The EU scheduled the next summit for January 30. Investors will get very anxious ahead of the meeting. Sovereign bond auctions are not going well and Standard & Poor’s/Fitch will release their European credit rating review before then. The pressure going into the meeting could be huge. I believe it will be almost impossible to reach a meaningful agreement on fiscal policies for the entire EU. Half of the nations are already “underwater” and they will oppose measures that would require immediate action (pain). A unanimous vote is required and this process will drag on the entire year.

The US is plagued with the same problem. Politicians are polarized and they can’t even agree on issues where the desired outcome is mutual (extending payroll tax credits and unemployment benefits). This gridlock will continue ahead of the November elections.

Tomorrow we will get ADP employment, initial claims and ISM manufacturing. I’m expecting all of those releases to be positive. On Friday, the Unemployment Report should also be positive. Analysts are expecting 150,000 new jobs. In December 2010, employment looked like it was turning a corner. Seasonal strength made the number look better than it was and job growth declined in the first quarter.

Two new companies (APKT and NATI) warned. This is one of the busiest preannouncement seasons in the last 10 years and most of the warnings are coming from the tech sector.

We did not get a Santa Claus rally and that tells me that Asset Managers are not chasing stocks and they might be reducing risk. The market is near a major resistance level and there are many looming issues. Bond auctions in Europe are not going well and ratings agencies will downgrade credit. China’s economy is weakening and there is no sign of easing. Earnings season is right around the corner and guidance has been weak.

The market backed off of its highs yesterday and I still have my put positions. I am breathing a little easier today, but I know that the next two days could be bullish due to economic releases. This news might be priced in and a dismal bond auction in France could get me through the week. Next week, I will grow more confident. On January 9th, Alcoa will release earnings and I believe the demand for aluminum in China will be soft. That will set a negative tone for a few days.

December and January have historically been great months for the market. When the performance is flat to negative, it is a bearish sign. I might get shaken out of my put positions in the next few weeks, but I will be looking for a good entry point to get short.

The wildcard is Standard & Poor’s. I expected that credit rating review in December and I sense that they want to get the release out as soon as possible. That news is likely to hit on a Friday after the close. This is what they did in August when they downgraded the US. This gave the market the weekend to digest the news. I don’t believe this event is priced into the market. Standard & Poor’s has been aggressive and the downgrades will be worse than expected. If that news comes this Friday, I could be in great shape. That is why I want to hold on to my puts.

Stocks tested the downside is morning and they have bounced a little. We are likely to see a tight trading range today. If bulls can’t stage a rebound this morning, we will drift lower this afternoon and close near the lows of the day. Support at SPY 126.40 will hold today. If the market closes above yesterday’s high (SPY 128.50), I will get out of half of my put position. If it does not, I will continue to hang on to my puts. 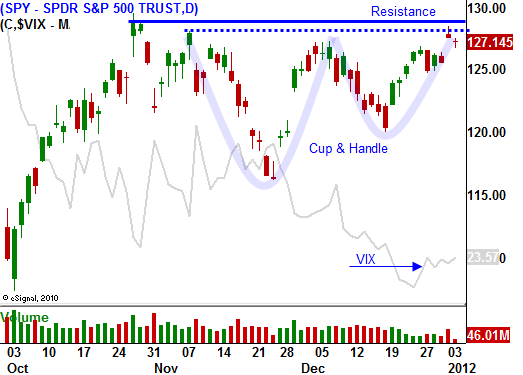