Three Great Economic Releases – No Rally. Asset Managers Are Not Chasing – Some Are Selling

The market is off to a rocky start this year. Stocks shot higher Tuesday after China posted a better-than-expected PMI. Traders digested the news and realized that it was not that encouraging. Europe’s PMI had fallen for the fifth consecutive month and it came and at a dismal 46.7. Furthermore, many analysts believed that China would lower bank reserve requirements and it did not. Stocks tested the downside Wednesday and spent most of the day grinding back.

This morning, a fantastic ADP employment report showed that 325,000 jobs were added to the private sector. In a separate report, initial jobless claims fell by 15,000 to 372,000. The good news kept building and ISM services rose to 52.6 in December. That was also better-than-expected. These economic releases should’ve produced a massive rally and they did not.

The job scene in the US has been improving the last two months. Much of the increase is tied to the service sector and I believe retail and restaurant are providing temporary seasonal strength. Conditions are improving, but I believe the numbers are not sustainable. Tomorrow, the Unemployment Report will be released and the consensus estimate is for 200,000 new jobs. This news should be bullish for the market.

Once this wave of buying exhausts itself, I believe the markets will rollover. The SPY is up against major resistance and the breakout Tuesday did not hold. Next week, earnings season will kick off.

Stocks have rallied into earnings for 10 consecutive quarters. This time around, the buying has been very passive. The market finished 2011 on a whimper and that is not typical for the third year of a presidential term. Historically, stocks have rallied as the president reaches across the aisle ahead of elections.

When the market fails to rally into year-end, it is a bearish sign. Asset Managers will typically bid up stocks on light volume to enhance performance. In 2011 they didn’t want to chase stocks and some Asset Managers sold into strength. They know that there are many dark clouds on the horizon.

This has been one of the busiest preannouncement quarters in the last 10 years. Companies (tech in particular) are reducing guidance. Retailers posted holiday results this morning and revenues were mixed. I view this as a very concerning sign. Sales should have been fantastic. Stores were open longer and the discounts were huge. The hope was that strong sales would offset discounting and higher expenses. Now it appears that margins will suffer.

So far, I’ve only talked about the US. On the surface everything seems bullish. The market has been able to hold its own, interest rates are declining, inflation is low, the job scene is improving and stock valuations are cheap. The only negative is that Washington DC will be in gridlock for another year while conditions deteriorate.

China is the growth engine for the world. Its Finance Minister came out yesterday and said that they are in for a tough first quarter. He sees a drop-off in demand and higher input costs. He has also stated that there are regional financial concerns. I have been reading reports about China’s real estate market and the conditions are very “frothy”. More than 10% of China’s GDP comes from residential housing. That is twice as much as our peak in 2007. Prices have been moving lower at an incredible rate and there are many unfinished developments and empty properties. Their stock market fell 25% last year and when it reopened in 2012, it declined even after a better-than-expected PMI. Their Purchasing Managers Index was just barely above the contraction level and it was not robust.

Europe has grabbed most of the headlines in the last few months. I truly believe that they were on the brink of a financial crisis in November. Central banks took the lead role and extended an unlimited line of credit to the ECB. That sent a message and the ECB extended and unlimited three-year line of credit to European banks. In the two weeks that followed, European banks tapped the ECB for an incredible €500 billion. Many global banks and financial institutions had been dramatically reducing their exposure to Europe and the liquidity was drying up quickly. Interest rates across the entire EU were jumping higher and that is exactly what contagion looks like. The ECB’s balance sheet is as big as it was during the 2008 financial crisis.

In theory, European banks would borrow money from the ECB at 1% and they would lend it to PIIGS at 6% or 7% (carry trade). This same maneuver worked in 2008, but banks are not falling into the same trap twice. They have sustained enormous losses on their sovereign debt holdings and they are sitting on cash they drew from the ECB. Euro banks ran out of eligible collateral so the ECB had to lower the standards.

European banks did not take write-downs in 2008 and they did not raise capital as US banks did. On January 20, they will have to present a recapitalization plan to the European Banking Authority (EBA). If new Basel III requirements were put into place, 21/28 banks would fail.

In the next few weeks, Standard & Poor’s and Fitch will release their review of European credit ratings. Many single and double downgrades can be expected. Last August, Standard & Poor’s downgraded US debt and they did that after the close of business on Friday. After the European summit in November they said they wanted release their review as soon as possible. S&P has been aggressive and I don’t believe the market has priced in these downgrades. The news could come as soon as tomorrow and this dark cloud will keep buyers at bay.

Germany held a bond auction yesterday and the results were dismal. They wanted to auction €5 billion in bonds and they were only able to sell $4 billion worth. The bid to cover was 1.2 and that is a poor showing for the cornerstone of the EU. France held a bond auction last night and the results were okay. Hungary tried to auction bonds last week and this week. They canceled both auctions due to poor demand.

Interest rates in Europe are creeping higher. The next summit is not scheduled until January 30 and the market will stew while it waits. Any meaningful fiscal policies will be impossible to reach. Many EU members are already underwater and they would have to agree to instant “pain”. At best, the EU will reach a watered-down solution by the end of 2012 and the March timeline will come and go quickly.

It’s hard to imagine that conditions could feel so good in the US and yet the market is unable to move higher. Today’s commentary is lengthy for a reason. I want you to lift up the hood and look at all of the surrounding issues. The market could move higher and it could break through resistance at SPY 130. If it does, I will exit might put positions and look for a better entry point. I believe the next big move is down.

I am long puts and I am taking some heat. If I can get through tomorrow, I believe I will be in good shape. Standard & Poor’s is a wildcard and if they release their European credit review after the close Friday, stocks will decline on Monday. If this news does not hit, I believe earnings from Alcoa will set a negative tone.

Of the total option open interest for all months, 45% expired in December. Asset Managers only rolled 10% of their positions out and I believe that leaves them exposed. This is why option implied volatilities have been declining. If we do get a selloff, they will be scrambling to add protection and that could exacerbate the decline.

If you thought 2011 was volatile, wait till you see the price action this year. 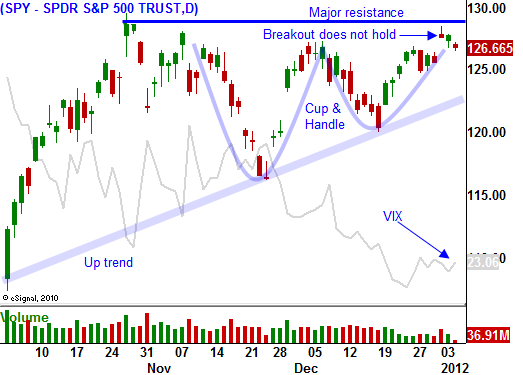