Huge Gap Up and No Follow Through. China’s PMI Not Great – Watch For Signs of Resistance

Over the weekend, China released its PMI and it poked back above 50. That was better than expected, but it is far from robust. Europe’s PMI declined for a fifth straight month and it came in at a dismal 46.9. The focus has been on China this morning and stocks are pushing higher on the news.

This will be a very busy week for economic releases in the US. ISM manufacturing rose to 53.9 and that was slightly better than expected. On Thursday, ADP employment, ISM services and initial claims will be released. The biggest release of all will be the Unemployment Report on Friday. During the last month, initial jobless claims have been declining and that bodes well for Friday’s number. Consensus estimates are for 150,000 new jobs.

Thursday and Friday, Germany and France will hold bond auctions. Both countries are relatively stable and the auctions should go well.

There isn’t much to stand in the way of today’s rally. A small dose of good news has stocks rallying to a major resistance level.

Next week, earnings season will kick off. The big releases are still two weeks away. For 10 consecutive quarters, stocks have rallied ahead of earnings season. We will see if that pattern holds. Asset Managers did not buy stocks into year-end and that could be a sign that they are selling into strength.

This has been a very tough market to trade. Once again, we have a massive overnight gap and now the market is flat lining after an hour of trading. One bad news item it will reverse the other way. We need to have directional movement that is sustained.

Spain and Italy will hold bond auctions next week and that could be a “fly in the ointment”. The ticking time bomb is Standard & Poor’s European credit review. They have not set a timeline, but they did say that they would release the review as soon as possible. Trading volumes should return to normal this week and I would not be surprised to see the release after the close on Friday. Fitch will probably release its review later in the month.

Stocks look extremely strong this morning and they have broken out above minor resistance. In today’s chart you can also see that a cup and handle pattern has formed. That is also a bullish sign.

I’m long puts and I will continue to hold them as long as the market does not break out above SPY 130. I have half of my normal position on and I advised you to keep your size relatively small into year-end.

The news out of China was not good enough to justify this rally. Many traders were speculating that China would lower bank reserve requirements this weekend and they did not.

Conditions in Europe are tenuous and Eurocrats have not scheduled another summit. The process of forging new fiscal policies for the entire EU is enormous and the market will grow impatient. The unlimited 3-year credit line provided by the ECB was a band-aid and it will not solve the problem. I believe we were on the brink of a financial crisis in Europe in November and we barely avoided it. Banks are gobbling up the cash and they have run out of collateral to post.

The bond auctions in Spain and Italy next week could be problematic. European banks are not going to purchase sovereign debt and fall into the same trap twice.

Last year, China’s market was down 25% and European markets were down 15%. A flat year for the S&P 500 might not feel that great, but our market outperformed other major markets.

Every day that Europe avoids a financial crisis, the market wants to rally. As soon as one bad news event is released, the rug gets pulled out from under us.

We are currently trading against seasonal strength, earning season and improving employment conditions. Asset Managers would normally be buying into this rally with both hands. I believe they will be cautious because they know the conditions in Europe are tenuous and rating agencies are about to release their reports. China’s economy has been slowing down and earnings guidance was been relatively weak in December.

I’m losing money on my put positions, but I’m not afraid of a runaway market. I believe there are too many unresolved issues and Asset Managers will sell into strength. The market rally has stalled and I believe we could see late day weakness. If I see that, I will hang on to my put positions.

If the market closes near its high of the day I will exit half of my position. I am more inclined to trade the short side than I am the long side. If I do get out, it will be temporary and I will be searching for a better entry point.

The price action throughout the day will be very telling. Watch for resistance. 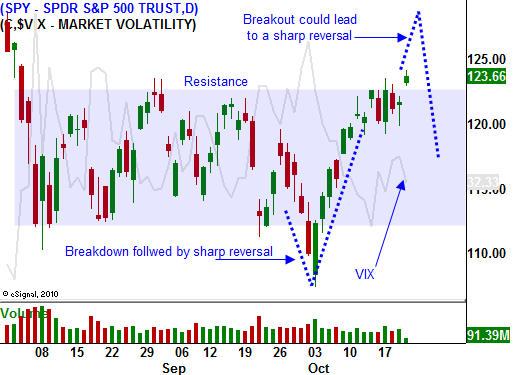