The market surged higher on Tuesday and investors started the year off on a positive note. Since then, the momentum has stalled and stocks have not been able to move higher in the midst of strong economic news.

This morning, the Unemployment Report showed that 200,000 new jobs were added in December. Initially, the S&P 500 rallied on the news. Decent job growth was already priced into the market and stocks are drifting lower. Yesterday, ADP employment exceeded expectations and initial claims declined more than expected. ISM services and ISM manufacturing both came in ahead of estimates.

I am still long puts and I just want to get through the day. As it stands now, I’m in pretty good shape.

Standard & Poor’s has been very aggressive in their credit reviews and they are still the only ratings agency to have downgraded the US. They released this news after the close on Friday last August. This gave the market plenty of time to digest the news.

When the European summit ended in November, S&P said they are going to review the entire EU and single and double notch downgrades should be expected. They also said that they want to release the news as soon as it is available. My gut tells me that it could come after the close today.

With each passing week, the probability grows. Standard & Poor’s has been very aggressive and I don’t believe the market has priced in widespread downgrades. Fitch will also review all of the European credit ratings and it will release its results in the next three weeks.

Interest rates in Europe are creeping higher. Germany had a dismal bond auction this week and France did slightly better. Next Thursday, Spain and Italy will hold bond auctions. Both countries have a huge amount of debt to rollover in the next few months. Hungary tried to hold two bond auctions and both were canceled due to light demand.

On January 20, European banks will have to present their recapitalization plans to the European Banking Authority. If Basel III were passed 21/28 banks would fail. I believe European banks were very close to a financial crisis. The ECB’s move to grant unlimited access to three year funds bought them a little time. They will not use the proceeds to purchase longer-term sovereign debt.

The market liked this maneuver, but its short-term effect has run its course. Banks quickly ran out of eligible capital and the ECB had to lower its collateral standards. The ECB’s balance sheet is as large as it was during the financial crisis in 2008 and Euro banks borrowed €500 billion in just 2 weeks.

Earnings season kicks off next week and we’ve had a ton of pre-announcements. I believe Alcoa will set a negative tone. Demand for aluminum in China will be low and the guidance will be weak.

The market is bumping up against major resistance and I believe it will pull back next week. If S&P releases its credit review after the close today, the price action could be very nasty. If they don’t post their review, that pressure will keep a lid on any rally next week and the possibility of both ratings agencies posting tandem reviews will increase. The news from Alcoa and the bond auctions in Spain and Italy should provide relief for short positions next week.

Implied volatilities have been dropping and only 10% of the options positions that expired in December were rolled out. I believe that leaves downside risk exposure and the decline could be swift.

I will stay short over the weekend. I only have half of my normal exposure so I’m not making a major bet. If you don’t have any put positions, consider adding them today. Even if we get a late day rally, I don’t believe the highs of the week (SPY 128.60) will be penetrated. Support at SPY 126.40 should also hold today. 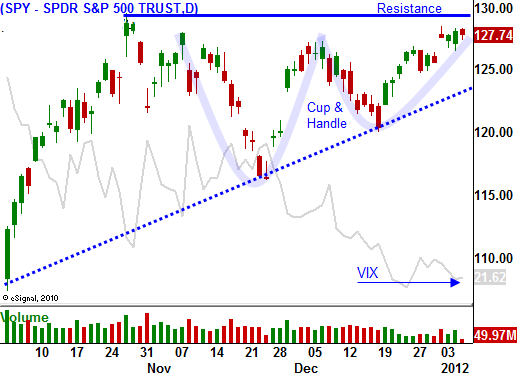