Last week, the market ran up to resistance on the first trading day of the year and it stalled. An excellent round of economic releases was not enough to force a breakout. Asset Managers are cautious and they are not chasing the market higher.

Today, earnings season will kick off. Alcoa will announce after the close and I am expecting poor guidance. Half of their revenues are generated overseas and they will point to weakness in China.

This has been one of the busiest preannouncement periods in years. S&P 500 growth forecasts have been cut in half for Q4. Now analysts believe earnings will increase 7.2% year-over-year. If this holds true, it will break a double-digit growth streak that has lasted eight consecutive quarters.

Banks decreased write downs and they used accounting changes and to pump up earnings. Those adjustments won’t be available this quarter and that will weigh on profits. Oil companies account for a huge percentage of the S&P 500 market cap and oil prices have fallen relative to year ago levels. The floods in Thailand will weigh on tech sector earnings. Retailers reported mixed revenues last week. Deep discounting and extended hours should have produced better results. Profit margins will be low for this sector. Stocks have rallied into earnings season for 10 consecutive quarters and that pattern looks like it will be broken.

European banks have been gobbling up three-year funds from the ECB. They have an enormous amount of debt maturing this year and they need to roll it over. Credit spreads are widening and they will sit on the cash they have drawn from the ECB. This will provide them with a cushion if the bond offerings go poorly.

In theory, the ECB hoped that European banks would use the loans to purchase sovereign debt. As I’ve been saying for weeks, they will not fall into the same trap twice. Over the weekend, Societe Generale’s CEO said that his bank won’t be buying large amounts of Eurozone sovereign debt. “It is not the responsibility of Europe’s banks to act as “final investors” for governments.” Consequently, interest rates in the EU will continue to climb.

This Thursday Spain and Italy will auction bonds. They collectively have €160 billion worth of debt maturing in the next three months. The bond auctions in Germany and France went poorly last week and that is a major warning sign. Hungary had to cancel two bond auctions do to poor demand. They were able to secure $160 million worth of six-week bills to hold them over while they negotiate a bailout with the IMF.

Greece is back in the headlines and the IMF is losing faith in its ability to implement structural reforms. It feels that larger haircuts (greater than 50%) will have to be taken to get the liabilities down to a sustainable level. Greece barely secured the last IMF loan and it could be weeks away from a default.

S&P did not release its European credit review after the close Friday. Now that time bomb is ticking even faster. They have been aggressive and they are still the only company to have downgraded US debt. I believe their downgrades will be widespread and the extent is not priced into the market. Fitch also stated that it will release its European credit review before the end of the month.

China released its housing numbers and unit sales are down 40% versus average December comps from 2008 – 2010. Residential construction accounts for 10% of their GDP and that is almost twice as high as a level in the US just before the housing bubble. I believe they are headed for a hard landing. Analysts have been expecting a reduction in bank reserve requirements the last two weeks and they haven’t gotten one.

Stocks were not able to rally into year-end, we did not get a Santa Claus rally and we are not getting an earnings rally. These patterns are very strong and conditions are changing. The market should be able to float higher on light volume and it has not been able to.

As I mentioned last week, I am still long puts. My last hurdle was to get through the Unemployment Report. Job growth was decent, but the market was not able to rally. Alcoa’s earnings after the close should spark selling. I believe the market will break below support at SPY 126.50 tomorrow and that will get the ball rolling. Weak European bond auctions on Thursday and dismal results from J.P. Morgan on Friday will push stocks below support at SPY 125.

If I don’t get this move, I will sell my January puts and I will buy February puts. The decline in implied volatility has added to my losses, but it might actually play help me when the market eventually breaks down. Asset Managers did not roll December put protection and I believe they have downside risk exposure. The decline could be swift and premiums should pop.

In this directionless market I only have half of my normal position. It did not want to place a big bet when I was trading against seasonal strength. I won’t have to fight that force in coming weeks and I might ramp up short positions if I see a sustained decline characterized by late day selling.

The market is drifting lower and I am expecting weakness into the close. If you don’t own any puts, I suggest buying some today. Our stop on the upside will be SPY 128.50 (half) and SPY 130 (half).
.
. 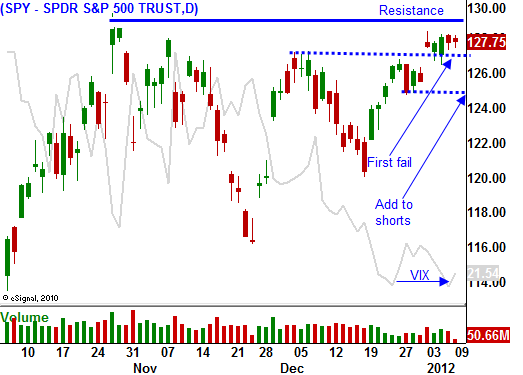