Fitch Will Not Downgrade France In 2012. Market Trying To Breakout On the News. Top Or Breakout?

Today we will find out if the market is forming a top or if it is ready to break out. There was one major development overnight that could push us through resistance at SPY 130.

This morning, Fitch said that it will not downgrade France in 2012. The market had already priced in a one notch downgrade and this news came as a relief. Standard & Poor’s might still downgrade France, but it is unlikely to reduce its credit rating by two notches. The credit rating review by both agencies has been a dark cloud that has been looming over the market.

Stocks in China rebounded sharply and they rallied 3% overnight. This is the second strong day in a row. Traders are speculating that the Peoples Bank of China will lower bank reserve requirements this week. Their CPI will be released Thursday evening and if it is benign, this easing might come to pass. China’s chief securities regulator also said that the country will open its capital markets foreign investment. China’s trade data also came in as expected. Their market was down 25% in 2011 and it was due for a bounce.

Alcoa kicked off earnings season and they lost money for the first time in years. This was largely expected. Their comments focused on long-term fundamentals and they believe the demand for aluminum will double in the next 10 years. That tactic (not focusing on short term demand) seemed to work and the stock rallied slightly after the news.

The market is bumping up against major resistance. All of the issues I’ve been speaking of during the last month have not gone away. Interest rates are so incredibly low that investors are being forced to take risk. Last year the S&P 500 was flat and 10 year bond were under 2%. Asset Managers desperately want to buy stocks, but macroeconomic issues are keeping them at bay. Every day the market avoids a financial crisis, the market push higher.

Interest rates in Europe continue to creep higher. Italy’s yields are near the all-time high. They will hold a bond auction this Thursday and I believe interest rates will climb. Yesterday, Societe Generale’s CEO said that they will not be participating in sovereign debt auctions. He said that European banks are not the “buyer of last resort”. The ECB is counting on Euro banks to support these auctions. Spain will also have a bond auction on Thursday. Between the two countries, they need to refinance €160 billion worth of debt in the next three months.

The situation in Greece is deteriorating rapidly. The 50% haircuts are not large enough and the IMF is discouraged by their budget cuts. Greece barely secured its last bailout payment and a default is imminent.

Conditions in China will continue to weaken. A Reuter’s poll showed that China’s average home prices will probably fall 10 to 20% this year. Residential housing accounts for 10% of China’s GDP. That is twice as high as the peak in the US before the housing bubble. The housing numbers released over the weekend showed that unit sales in China declined 40% in December relative to the average from 2008 through 2010.

In the US (2001 through 2005) 50% of our employment growth came from the housing sector. We know the devastation this caused in 2008. Imagine a crisis twice as large. China has been the global growth engine and a hard landing would send a shockwave through global markets.

European officials will meet on January 23 to discuss Iran. The tension is growing and they could impose an embargo on Iranian oil. If they do this oil prices will jump and that will weigh on economic growth.

In yesterday’s comments, I mentioned a number of sectors that would come under fire this earnings season. Financials, tech, energy and retail will struggle. The strongest companies release early in the earnings cycle and that news could push the SPY through resistance. A cup and handle pattern has formed and that breakout will attract buyers.

I would welcome a new high for the year. The market would be moving in one direction and the momentum could be sustained. Unfortunately, that won’t happen. Sentiment is very bullish and the VIX is below 20 for the first time in months. Once the initial wave of buying subsides, stocks will reverse.

Just as we’ve had a pre-earnings rally the last 10 consecutive quarters, we’ve also had a decline at the backend of the earnings cycle. Stocks will peak and the breakout will fail. Bullish speculators will get flushed out and the decline will be swift. With each passing month, we draw closer to a financial crisis in Europe and confirmation of a global slowdown in economic activity.

If the market can hold gains today I will take my losses and wipe the slate clean. I will day trade stocks from the long side if the rally gains momentum. My positions will be small and I’m not going to ignore all of the warning signs.

My put positions have been dying a slow death the last two weeks and I’m ready to pull the plug. If by chance the market reverses late in the day, there is still a chance that a top has formed. I am not seeing follow through to the early move and I will hang on if the market backs off.

The next big move will be down and I need to keep my powder dry. The worst thing I can do is to abandon my research and get long. When the big hurt comes, it will come quickly.

If you look at the nature of this rally the last month, it has been characterized by light volume overnight gaps. This is a low quality rally! 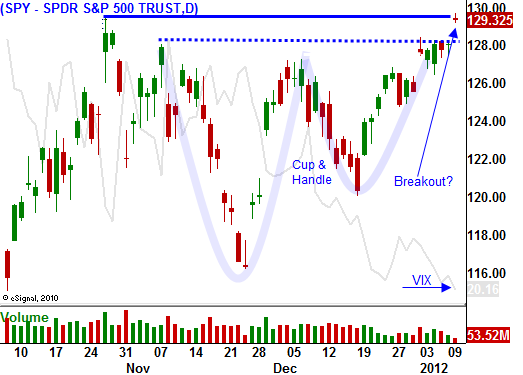