Bond Auctions In Spain and Italy Could Weigh On the Market Tomorrow. All Calm Before Earnings Season

Yesterday, the market broke out to a new relative high on news that Fitch would not lower France’s credit rating in 2012. They will be reviewing the entire EU and they will post the results along with S&P before the end of the month. This dark cloud has been hanging over the market and the news was bullish.

Most analysts have priced in a single downgrade for France. There is also a possibility that Germany will be downgraded. Given the comments from Standard & Poor’s after the European summit in November, I felt they would post their results as soon as possible. With each passing day that news is more likely to hit. Standard & Poor’s has been the most aggressive ratings agency and they are still the only one to have lowered the credit rating in the US.

The overnight news has been very light. The Beige Book will be released this afternoon and it might have a slightly bullish bias. Tonight, China will release its CPI. If inflation is benign, the market will start pricing in easing. The ECB and BOE will release statements tomorrow. Interest rates should remain unchanged and this will be a non-event.

The biggest news this week will be the bond auctions in Italy and Spain. I believe the demand will be soft and interest rates will climb higher. The two countries need to refinance €160 billion in the next three months and yields in Italy are near all-time highs.

Earnings season is about to kick off and stocks desperately want to rally. The market is right up on major resistance and it will take good news for the market to break out.

The rallies in the last two weeks have been characterized by light volume overnight gaps. Once the high is established, stocks fall into a tight trading range. That’s exactly the type of move we experienced yesterday.

The strongest companies release early in the earnings cycle and there’s a chance we could break out. If we do, that move will spark short covering and the momentum will fade after a week or two. Economic conditions are deteriorating globally and I believe stocks will rollover after the first few weeks of earnings. That breakout will fail and bullish speculators will run for cover.

Initial jobless claims will be released tomorrow and they should be good. Retail sales will also be reported and while the topline could be decent, profits will decline due to heavy discounting and extended hours.

Financial companies benefited from accounting changes and smaller write-downs last quarter. They won’t have that to lean on and earnings will be down. Tech stocks will struggle because the floods in Thailand have crimped supplies. Energy stocks comprise a huge portion of the S&P 500 and year-over-year profits will decline because of lower oil prices.

Earnings projections for this quarter have almost been cut in half and for the first time in two years, single digit earnings growth is expected. We’ve had one of the busiest preannouncement seasons in years and the expectations have been reigned in. Earnings guidance for Q1 will be the key.

I am still long puts and I will hold them for one more day. The European bond auctions could weigh on the market. If we don’t get the selloff I’m looking for, I will sell my put positions. Time decay will become an issue since Monday is a legal holiday.

I will be ready to buy February puts on a breakdown below SPY 126.50. This tactic will allow me to evaluate the earnings reactions next week and I will work from a clean slate.

Trading volumes have declined dramatically and the market is searching for direction. A major news event will result in a breakout or a breakdown. We need to be patient and we need to wait for a sustained directional move. These news driven light volume overnight gaps are not conducive for trading. 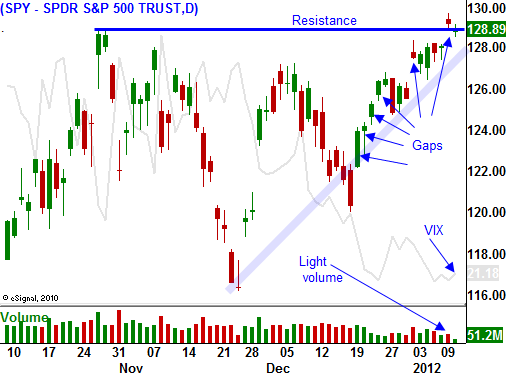