This morning, stocks were trading lower before the open. J.P. Morgan hit its bottom line, but revenues were soft. The stock declined on the news and the recent rally in financials leaves downside room. This is one of the strongest banks in the nation and it sets the tone for the entire sector. After an hour of trading, rumors started circulating that Standard & Poor’s will release its European credit review.

This is the news we’ve been waiting for. Rumor has it that 15 countries will be downgraded. France and Austria will be downgraded by one notch. If this comes to pass, it might not be too devastating for the market. I believe a one notch downgrade for France is expected. Again, we are only hearing rumors at this time. European markets will close in an hour and we can expect the actual release then.

Standard & Poor’s is still the only ratings agency bold enough to downgrade the US. They are very progressive and they will be the first ratings agency to review all of Europe. I don’t believe the market has fully priced in widespread downgrades. If Germany is downgraded, the market will tank. It is the cornerstone of the EU and this news is not priced in. I don’t believe their credit rating will be downgraded, but they might be put on negative watch.

Greece is perilously close to a technical default. Haircuts in excess of 50% need to be taken and private investors are not “biting”. The IMF is dissatisfied with their progress and Greece barely secured its bailout loan in December. I feel a default is imminent.

Ignore all of the great news about the debt auctions in Spain and Italy. These were short-term maturities and they should’ve gone well. The ECB is granting unlimited funds to European banks for the next three years and some banks will buy short-term debt. As soon as longer-term debt auctions are held, we will see a decline in demand. Widespread credit downgrades will make it more expensive for countries to raise capital.

Germany’s GDP declined in the fourth quarter (.1%) and I believe Europe is already in a recession. Austerity programs have barely kicked in and conditions will worsen. This will result in greater deficits.

China’s economy is also slowing. Residential housing accounts for 10% of their GDP (twice as high as it was in the US before the housing bubble) and unit sales were down 40% in December relative to the prior three-year average. China’s CPI came in a little hotter than expected this week and that might postpone easing.

Even if all of the credit downgrades are already priced into the market, I believe stocks will struggle to hold this level. Financials will dominate the earnings scene next week. Investment banking and trading revenues are down. Furthermore, banks pulled money out of bad loan reserves last year and that inflated earnings. They won’t have that catalyst this time around and comps will be down.

Retail sales were up .1% and that was lower than expected. Deep discounting and longer hours of operation will bite into profitability.

PC sales are light and the floods in Thailand impacted component supplies. Consequently, tech earnings will also be soft.

Oil prices have declined from year ago levels. Chevron warned yesterday. Year-over-year earnings will be down in the energy sector and it comprises a large part of the S&P 500.

This has been one of the busiest preannouncement seasons in the last decade. Earnings have been cut in half by analysts and this will be the first quarter of single-digit earnings growth in the last two years. We will pay particular attention to the guidance for Q1.

The economic numbers have been decent, but not great. ISM services and ISM manufacturing are hovering above 50. Job growth has also been decent, but not great. Low-quality jobs are being created in retail and restaurant and that is not healthy for long-term growth. Some of these jobs are seasonal and we might see job growth decline now that the holidays are over. Yesterday, initial jobless claims spiked.

We did not get a year-end rally, a Santa Claus rally or an earnings rally. Stocks are up against major resistance and they are due for a pullback. Asset Managers did not roll protective put positions in December and I believe they have downside risk exposure. The recent market rally has been characterized by overnight news driven gaps. This light volume move higher is of low quality.

I mentioned yesterday that I am buying puts in the financial sector and I am buying VIX calls. I am adding to those positions today and I want to make sure I have them on before European markets close. There’s a chance that the downgrades will be greater than expected and the market will close on a weak note.

Traders won’t take any chances over a three-day weekend. Even if we get a small relief rally on the credit review news, I believe the market will decline after Intel, IBM, Microsoft and Google announced next Thursday.

Add to put positions and by February options. Know that you might still take a little heat before the market rolls over. 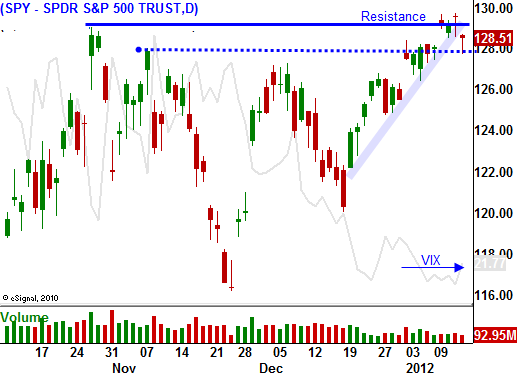