Euro Credit Reviews In Line. Good Numbers From China Not Enough To Spark A Breakout

Last Friday, news leaked out that S&P was going to release its European credit review. The downgrades were in line with expectations and the market handled the news well. European markets were open yesterday and they traded slightly higher.

The biggest concern was that France might get downgraded two notches and that Germany might also get downgraded. This did not transpire. France was only downgraded one notch and Germany was not even placed “on watch”. S&P has been the most progressive ratings agency with regards to sovereigns and I believe the reviews from Fitch and Moody’s will not weigh on the market. Last week, Fitch said that France will maintain AAA credit rating through 2012.

Last night, China said that GDP grew 8.9% year-over-year, industrial production was up 12.8% in December and retail sales rose 18.1%. All of these numbers exceeded expectations and the Shanghai index was up 4% overnight. Many traders have been speculating that China will lower its bank reserve requirements before it celebrates the New Year (1/23). I don’t believe they will lower bank reserve requirements – yet.

Earnings will be a focal point this week. They will be dominated by financials and the reaction (JPM and WFC) so far has been muted. I believe banks will struggle to find top line growth and the guidance will be weak. Any negative news out of Europe will also weigh on the sector.

Thursday will be an important earnings day. After the close, IBM, Intel, Google and Microsoft will post results. These companies will set the tone for the entire tech sector. None of them should be overly exposed to the floods in Thailand and the reaction will be relatively “pure”. .

The economic news in the US is fairly light this week. Industrial production, PPI, CPI, housing starts, building permits, Philly Fed, initial claims and existing home sales will be released. The numbers should be fairly good and housing releases have produced a positive reaction recently.

Flash PMI’s from China and Europe will be released on Friday and they could weigh on the market. China is right at the contraction level (50) and Europe is already in a recession.

The liquidity provided by the ECB has temporarily calmed investors. European banks are gobbling up three-year funds at an alarming rate and credit spreads are easing. The ECB’s balance sheet is as big as it was during the financial crisis in 2008. European banks are sitting on this liquidity with a few investing in short-term sovereign bonds. Any maturity less than two years seems to be a slam-dunk for the carry trade. Recent European bond auctions have been short-term in nature and they have gone well. This has also calmed investors.

Italy and Spain have a tremendous amount of debt to refinance (€160 billion) in the next three months and they will have to auction longer-term bonds. I believe the demand will be low and interest rates will climb.

Greece is dangerously close to defaulting. Private investors don’t want to take haircuts of over 50% and Greece could default in the next two months.

Even without a credit crisis in Europe, I believe the market is headed for trouble. Economic conditions in China are declining and earnings guidance in the US will be soft. The market might still have a little gas in the tank, but I believe we are in the ninth inning. If we do get a final push higher, it will come Friday after the tech giants post results. The SPY might briefly poke through 130.

I am long February puts on financials and VIX calls. I believe financial stocks will struggle as top line growth stalls. Europe is a ticking time bomb and at any moment option implied volatilities can spike. If we do get an upside breakout, I will day trade stocks from the long side to help offset my bearish positions. I don’t want to have the rug pulled out from under me so my bullish trades will be very short term in nature.

Stocks have backed off from early highs. If bulls can’t stop the bleeding by mid-day, the downside will be tested. Asset Managers don’t seem overly-enthused by the ratings news and they are not chasing stocks at this level. They will wait for guidance from mega cap companies in the next week before making a risk-on/risk-off decision. 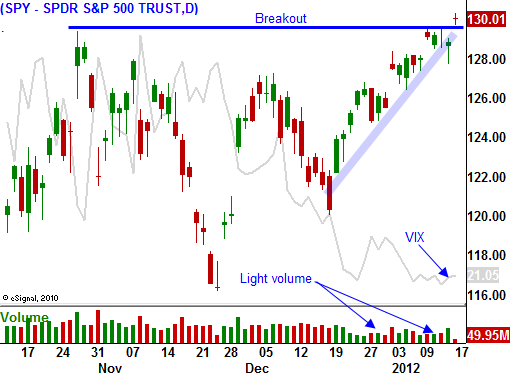