The Breakout Is Holding and the Price Action Is Bullish. Mega Cap Earnings After the Close Today.

Yesterday, the market inched higher the entire day and the breakout above SPY 130 feels legitimate. The price action was very consistent and the rally did not get ahead of itself. This stair-step pattern is bullish. I still feel there are enough dark clouds on the horizon to justify a hedged approach.

The overnight news was fairly light. Earnings were in line and financials are edging higher after Bank of America and Morgan Stanley. This sector looks overbought and I believe the gains from this point forward will be hard-fought. Top line growth was below expectations and new regulations will crimp earnings this year. Even without a financial crisis in Europe, this group will struggle to advance.

After the close, Google, Intel, IBM and Microsoft will release earnings. The expectations are high. Semiconductor stocks have rallied and they might be overextended. Microsoft has also moved higher in advance of Windows 8. PC sales have been relatively light and tech stocks could hit resistance.

“The dogs are barking.” This old Wall Street phrase is used when laggards are participating in the rally. SODA, NFLX, AMZN, DMND, GMCR, WHR and many others have sprung back into action. Asset Managers are searching for “unloved” stocks. Unfortunately, this is often a sign that the market rally is in its final stages.

The economic news has been decent. Empire Manufacturing, industrial production, initial claims, Philly Fed and housing starts were all positive this week. Tonight, the flash PMIs for Europe and China will be released. Earlier in the week, China’s GDP, industrial production and retail sales came in ahead of expectations. Their number should be right around 50. At that level, it does not pose a threat to the rally. Europe’s PMI will be weak, but the market is already expecting that.

The economic releases next week should be benign. GDP, durable goods, initial claims, LEI and consumer sentiment will be in line. The FOMC statement will remain unchanged.

Earning season will really crank up next week. Expectations have been lowered and consequently you would think that most companies have exceeded earnings estimates. For the first time in over two years, less than half of the companies (47%) have beat estimates. That is a reason to remain cautious.

Spain held an auction overnight and it was able to sell more than €6 billion worth of 10 year bonds. Those results were impressive since its goal was much lower. Interest rates inched higher, but the demand for these longer maturities was solid. There are rumors that private investors will agree to larger haircuts on Greek debt. That could also calm nerves.

The situation in Europe has improved temporarily. The ECB has shifted risk from European banks to its own balance sheet. This is a “quick fix” and I believe a financial crisis could still erupt at any moment.

China’s growth is slowing and that will provide another headwind in coming months. Residential housing accounts for 10% of their GDP (twice that of the US in 2007) and home prices have fallen two consecutive months. Foreign direct investment also declined 12.7% in December and China is losing its luster.

As long as investors believe European credit conditions are improving, the market will rally. This dark cloud has kept a lid on the market for two years and stocks are attractively valued at this level.

The breakout feels very real but I still believe a hedged approach is warranted. I am short financials and long VIX. If the market suddenly declines, these two positions will provide protection. I am day trading strong stocks to finance the carrying costs of my bearish positions. I don’t want to hold overnight positions because I feel the rug can get pulled out at any moment. Even with the recent rally, options implied volatilities have not declined. The VIX position is providing protection and is not losing money.

The market tends to rally during the first few weeks of earnings. The biggest, strongest companies release early in the cycle and good news is quickly priced in. By the middle of earnings season, stocks have a tendency to roll over. The current momentum should last another week before it loses its steam.

If you use the trading approach I’ve outlined, you’ll be able to generate profits during the rally without subjecting yourself to overnight risk. Option IVs are low and I would not advise selling put spreads or call spreads. This is a time to be long premium.

An alternative approach is to buy calls on strong stocks and to buy VIX calls. If the market tanks, the VIX will spike and the profit on your VIX calls will offset losses on your other bullish positions.

The market should grind higher the rest of the day. 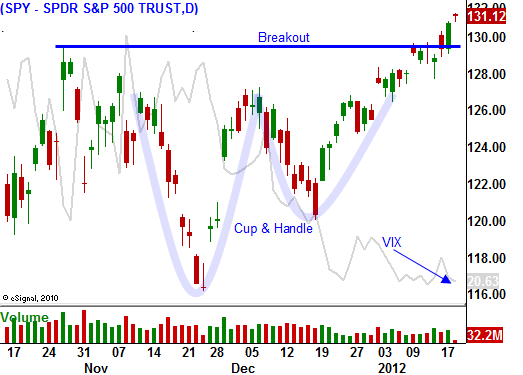