Last week, the market broke through major resistance and we saw follow-through buying. Stocks have rallied 10 consecutive quarters during the early part of earning season. Many of the strongest companies post results early in the cycle and optimism builds quickly. This morning, the price action is very lackluster.

China’s market will be closed this week as they celebrate the New Year. Many analysts anticipated a reduction in bank reserve requirements ahead of the holiday and it did not happen. Economic conditions have stabilized, but they are tenuous. Home prices in China have declined to straight months and their growth is dependent on residential housing.

International money market funds are rotating back into Europe. Conditions were dire in November and this is a sign of confidence. Interest rates in Spain and Italy have pulled back and the auctions have gone fairly well. They will hold major bond auctions in the next two months. Both countries are lobbying hard for a rate reduction from the ECB. They feel interest-rate spreads are way too high and they feel entitled to some relief.

Greece is trying to strike a deal with private investors. The proposals I’m hearing would equate to $.35 on the dollar. Even if this gets passed, it might not be enough. Greece just lowered its growth projections for 2012. Greece will default and investors will spend 2012 wondering if the ECB can prevent contagion.

We have reached the “all in” stage. Risk has shifted from banks over to the ECB. Their balance sheet is as big as it was during the financial crisis in 2008. In another month, we learn how much money European banks have borrowed in recent months. I’m hearing estimates in excess of €1 trillion. In the first two weeks that the ECB offered unlimited access to three-year funds, European banks gobbled up €500 billion in credit.

France and Germany are pushing for lower Basel III requirements. That’s because 21/28 European banks would fail under the current plan. Their condition is so weak that the ECB had to lower collateral standards so that banks had assets to pledge her three-year loans.

The Fed has granted the ECB unlimited access. They can pledge Eurodollars in exchange for US dollars and we will charge them .5% interest for the swap. Developed countries are so indebted that we are simply exchanging worthless paper for worthless paper.

The global financial system is intertwined. Banks will keep transacting business until the house of cards tumbles and it will be business as usual until that day. When financial institutions lose confidence in each other, the music will stop.

The Apple is rotten to the core. Debt is at unprecedented highs across every level (federal, state, municipal and personal). Corporations are the exception. Their balance sheets are as strong as they’ve ever been and they are running lean and mean. Stocks are attractively valued and as long as all of the players believe in the financial system, the market will move higher.

I’ve started the week off with enough gloom and doom. Let me shift gears and talk about the week ahead.

Earnings should be decent, but good news is priced in. Tomorrow, COH will post earnings before the open and that will set the tone for luxury retail. Tuesday after the close, Apple will post earnings. This will reveal consumer demand for mobile devices.

Approximately half of the companies that have posted earnings have exceeded estimates. This is the worst showing in two years and estimates for this quarter have already been lowered by 50%. Companies should have been able to beat easily.

Tuesday evening we will get the State of the Union Address and it will set a positive tone for the market. The President will highlight how “well” the economy is doing and there will be robust projections for this year. Wednesday, the FOMC will release a statement. The rhetoric will remain the same but we might hear about improving conditions. The other economic news includes durable goods orders, initial claims, Chicago Fed, GDP and LEI. Overall, I’m not expecting any big fireworks from the economic releases, but they should be generally positive.

Financial stocks reported miserable top line growth. Regulations in the financial sector will increase and that will make it more difficult for them to make money in 2012. They rallied last week when credit concerns in Europe subsided. European financial stocks cannot be shorted and I believe US financials were shorted to hedge European risk. Once that dark cloud parted, shorts bought back US financials. I believe this bounce has run its course and banks will struggle to move higher.

Oil prices have declined in the last year and energy makes up a huge part of the S&P 500. I believe earnings will be soft and this sector will weigh on the market.

Retailers discounted heavily and they maintained longer hours of operation. Profit margins will be slim and revenues will miss estimates.

The breakout through resistance was convincing. I feel that bullish sentiment has got ahead of itself and we are due for a swift pullback. That will flush out speculators and Asset Managers will bid for stocks at lower levels.

Economic conditions in China will deteriorate in coming months and Europe is already in a recession. Credit concerns will resurface and earnings guidance will be weak. These events still need a few months to play out. By April/May, I believe the table will be set for a sustained decline.

The market still has another good week left in it. By next week, we should start to see some selling. I will be watching for late day declines and I will also monitor earnings reactions. If stocks beat estimates and decline after the number, I’ll know we are close.

I am short financial stocks and I am long VIX calls. These are bearish positions and I will offset my carrying costs by day trading strong stocks. I don’t believe I will be buying any stocks today. The price action looks very sluggish and we are likely to trade in a tight range.

Option premiums are cheap. If you are long calls on strong stocks, I suggest balancing your portfolio by buying puts on weak stocks. This is a great time trade relative strength and relative weakness and to have a balanced weighting on both sides. This strategy will benefit from a breakout in either direction.

If the SPY closes below 130, sell some of your long call positions. 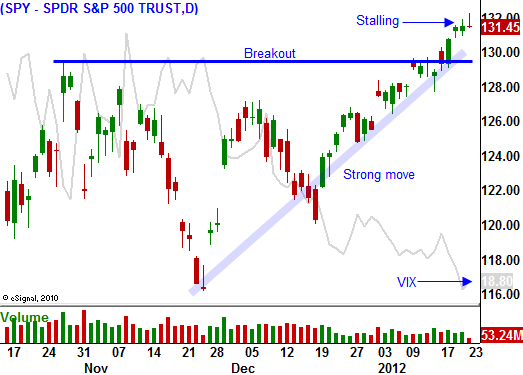