State of the Union – Apple – FOMC – All Should Be Bullish. One More Push Higher.

The market has started the year off on a positive note. It has not had a down day is January 13th and there have only been two down days all year. Yesterday, stocks looked tired and the trading range was very narrow.

Overnight, the flash PMI for Europe came in at 50.4 and that was much better than expected. It is back above the expansion level. The news is good, but I would not get too excited about one data point. Months of economic releases point to a recession in Europe.

Greece has still not reached an agreement with private investors. The coupon rate is the issue and the “troika” would like to see it at 3.5% versus 4% on the part of investors. If they come to terms, this would equate to a 65% haircut. Many analysts believe that Greece will need a second bailout and they need to get through this process before it will be considered by the IMF.

Bond auctions in Europe have gone fairly well, but the calendar will be full of new offerings. Spain and Italy still have €130 billion to refinance in the next two months. The short-term maturities are a slam dunk and investors/banks are willing to lend money inside of a two-year window. Longer-term maturities will be an issue.

The IMF is pleading with Europe and global investors to increase its reserves. The head of the IMF (former Finance Minister of France) fears a 1930’s type depression if contingency funds are not expanded. China and the US have already said they won’t contribute and they feel Europe has all the resources it needs internally. EU members don’t want to contribute money.

Finland’s conservative favorite easily one the first round of presidential elections last Sunday. An anti-EU movement has started and they don’t want to contribute any more money to the bailout funds. This fragmentation will escalate in 2012 it will be virtually impossible for the EU to agree on fiscal reform policies.

The ECB has lowered collateral requirements and they have provided banks with much-needed liquidity. Their balance sheet is as big as it was in 2008 and some analysts believe that it will grow to €1 trillion. We won’t get that number for another month. Risk has shifted from financial institutions to the European Central Bank.

This is an “all in” strategy and it will only work if banks support sovereign debt auctions. I believe European banks will stick to the short end of the yield curve and they will play the “carry trade” inside of the three-year window provided by the ECB.

As long as the market “believes”, stocks continue to move higher. From a trading standpoint, I feel like I’m walking on a frozen lake. I’m trying to be cautious because I don’t know how thick the ice is. The key is getting to the other side without falling through. Conditions will be very tenuous this year.

The overnight earnings were pretty decent. Tech stocks are treading water on the back of Texas Instruments and Western Digital. Cyclicals are not as strong and tax benefits helped DuPont beat bottom-line estimates by a small margin. Coach posted solid numbers and the stock jumped higher. This might be a good sign for luxury retail.

After the close today, Apple will release. Expectations are high and the stock has rallied 15% in two months. It will set the tone for retail and technology.

The President will deliver his State of the Union Address this evening. It will be a campaign speech and we can expect references to Romney’s 14% tax rate. Democrats could not have asked for better timing of the release of his tax documents. I believe tax rates should go up, but only if matched by spending cuts. We need both to have a material impact on deficits. Overall, the speech should be market friendly.

The Fed will release its statement tomorrow and it should be a non-event. They might reference improving economic conditions.

GDP, initial claims, durable goods and LEI will be released this week. These numbers should also be positive for the market.

I believe we have one good rally left in this move. By next week, stocks should start to weaken. All of the good news will be built-in.

Even after earnings estimates were lowered by 50% in recent months, only half of the companies have been able to beat. This is the worst showing in two years.

This morning, we saw a little profit-taking. There was not any real reason for the market to sell off. In fact, the PMI news out of Europe was fairly decent.

I am short financials and that position starting to look good. ZION posted its number yesterday and the stock is trading lower. I am also long VIX calls. These two bearish positions are my core holdings. I am day trading strong stocks from the long side to offset the carrying costs of my bearish positions. I still feel like the rug can get pulled out from under this market at any moment.

If the market can’t make a new low this afternoon, buyers will step in. I might buy a few stocks in the last hour with the intent of getting out by the close if this plays out. 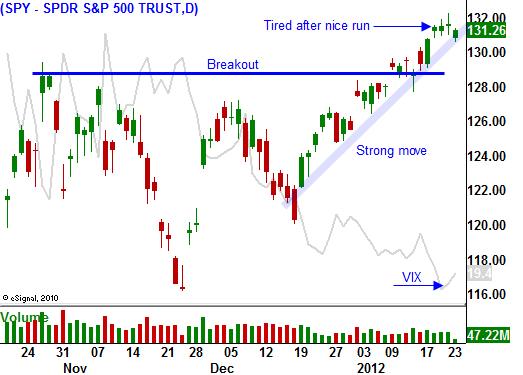