The Momentum Has Stalled – FOMC Should Provide an Afternoon Spark.

The overnight news has been fairly light. Traders are focused on earnings and the results are mixed. President Obama’s State of the Union Address had a few interesting items, but there weren’t too many surprises.

The market started off on a negative note when selling in Europe spilled over to our market. Earnings from Siemens yesterday and Ericsson today pressured stocks. Greece has still not come to terms with private investors. The coupon payment seems to be the sticking point. Analysts believe the haircut will come in around 65%.

The President bashed financial institutions and we can expect new regulations. He wants them to participate in a nationwide mortgage refi to help responsible homeowners. Banks would eat the cost and it would be a form of repayment to taxpayers who bailed them out. Financial institutions have been struggling to generate revenues. I still like shorting the sector. Dismal top line growth and new regulations will pressure these stocks.

President Obama also suggested taxing overseas corporate profits for multinational companies even if the money stays abroad. His advisers forgot to mention that corporations can simply move their headquarters overseas and completely avoid US taxes. This trend started years ago and it will accelerate if this plan is passed. He still doesn’t understand that corporations are not the enemy. They provide jobs and the government needs to clear the path instead of throwing up roadblocks. The US already has the second-highest corporate tax rate in the world.

The earnings news has been mixed. Apple knocked the cover off the ball and profits doubled. It is now the largest company in the world and the stock rallied 8% on the news. Boeing and other cyclical stocks are struggling after releasing earnings.

Earnings estimates were reduced by 50% this quarter after pre-announcement warnings and companies should be beating lowered estimates. Only half of the companies have been able to beat and that is the worst showing in over two years.

The biggest high-growth companies have released and the market has not been able to advance. I view this as a bearish sign.

This afternoon, the Fed will outline its interest rate policy. They will be providing the market with new information with the goal of increasing transparency. The Fed has come under fire recently and this is a smart move in an election year. Interest rates will remain low for an extended period of time and the news should be market friendly.

Tomorrow, initial claims, durable goods, Chicago Fed and LEI will be released. Conditions have been gradually improving and the news should be positive. GDP will be released on Friday.

I felt that the market would have one more good push higher this week. The State of the Union Address and gangbuster earnings from Apple failed to attract buyers. Guidance for Q1 has been very guarded and the market is trying to tread water.

After an excellent run, stocks are due for a pullback. I am still long VIX calls and I am short financial stocks. I am not day trading strong stocks from the long side because the market momentum has stalled. If we breakout, I will resume my day trading.

Each passing day, the likelihood of a market decline increases. Bullish sentiment is high and speculators need to get flushed out. For 10 consecutive quarters, stocks have rallied into earnings and they have declined toward the end of the cycle. Good news gets priced in and stocks run out of gas. I believe we are getting closer to this inflection point.

If the SPY closes below 130, lighten up on your long positions and add to short positions. You should be maintaining a balance portfolio at this stage that contains bullish and bearish positions. If the market closes below SPY 128, take a more bearish stance.

Don’t short this market prematurely. The momentum has been strong and now that European credit concerns have waned, it will be hard to turn. Wait for the breakdown and then add to bearish positions.

The market has been able to rally late in the day and the FOMC release might give it the ammo it needs. Look for quiet trading and an afternoon move.
. 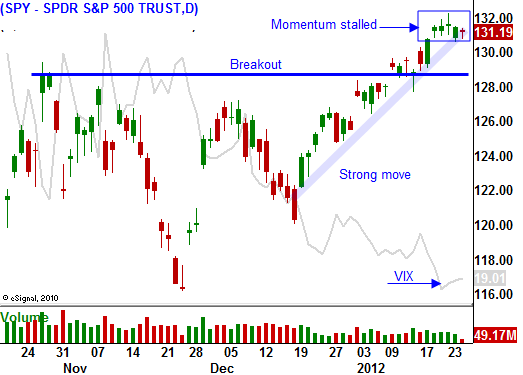