The Printing Presses Are Running. This Was the Final Push. Watch For Signs of Selling

The price action this week has been rather subdued. Most Asian markets have been closed to celebrate the New Year and the economic releases have been minor. Traders are focusing on earnings and the results are in line.

Yesterday, the Fed provided a spark when they set a zero rate policy through 2014. The printing presses in Europe and the US are running at full speed. Stocks had a mixed reaction initially, but they eventually rallied on the news. The Dow is close to a 3 1/2 year high.

Conditions feel like they are improving, but the Fed obviously has concerns. Europe is in a recession and China’s growth is slowing. Domestic employment is improving, but seasonal strength has distorted the true picture. In the last few weeks, initial jobless claims have spiked higher. The quality of employment is also low. The service sector is hiring waiters and cashiers, not accountants, financial analysts and attorneys. Furthermore, many workers are untrained and they have left the work force permanently.

In his State of the Union Address, the President was able to candy coat our progress. He said that 3 million jobs have been added since he took office. Business inventories were at record lows and that rebuild alone accounted for half of the jobs. We need to add 3 million jobs per year just to keep up with the growing labor force. This is the longest and deepest employment trough we have seen since the Great Depression.

The President wants multinational corporations to pay taxes on overseas profits even if the funds remain abroad. During his term, more companies have left the US than ever before. He doesn’t understand that they can simply move their headquarters and completely avoid US taxes. Business is our ally, not our enemy. Our government needs to clear the path, not throw up roadblocks.

The ECB has granted European banks unlimited access to three-year funds. They were on the brink of a financial crisis in November and drastic measures had to be taken. So far, the market reaction has been very positive. European banks have gobbled up as much money as they can. The ECB’s balance sheet has not been this big since 2008 and many analysts believe it will reach the €1 trillion mark by the end of February.

Risk as shifted from private banks to central banks. This is the last stop. The next financial crisis will be global. The ECB has unlimited access to central banks around the world (including the Fed) and all of the chips are on the table. If the ECB fails, we all fail.

If Basel III were passed, three quarters of the European banks would fail. Germany is asking for the policies to be rewritten to relax the rules. The ECB had to lower collateral standards so that European banks would have assets to pledge for the loans. The ECB’s move was necessary, but the effect will be temporary.

Entitlement programs across Europe, Japan and the US are bankrupting governments. An aging demographic will increase deficit spending (exponentially) in the next few years. Politicians have already proven that they are incapable of restructuring entitlement programs. Social Security and Medicare should have been restructured decades ago.

In the course of the next year or two, deficits will escalate and interest rates will climb. Next week, Italy will auction 5 and 10 year bonds. So far these auctions have gone well, but that can change in an instant. Longer-term maturities lie outside ECB’s three-year window and these auctions will be strained.

China’s market has been closed this week. Home prices have declined 2 consecutive months and this could be the beginning of a “housing bubble”. Unit sales in December fell 40% vs. the average the prior two years. Residential real estate accounts for 10% of their GDP and that is twice as high as it was in the US pre-bubble.

Pre-announcement warnings were as high as they’ve been in 10 years and analysts lowered profit projections by 50%. Even with that adjustment, only 60% of companies have exceeded estimates. This is the worst showing in over two years.

The market breakout and the follow-through feel great. Finally, we have some momentum. European credit concerns temporarily eased and this was the catalyst. In 2010, stocks started an eight-month rally that resulted in a 35% gain. It was all based on renewed confidence in Europe.

The recent liquidity moves are temporary and fiscal policies will be impossible for the EU to agree on. Half of the EU is already under water and they would suffer immediate pain. Consequently, any meaningful reform won’t get the required unanimous vote.

During the State of the Union Address President Obama proposed a nationwide mortgage refi. The big bad banks would eat the costs for this program and this would serve as “repayment” for taxpayer bailouts. The Fed said that it will keep its zero rate policy in force for another two years. At this level, that will hurt bank profitability.

We can expect many new regulations for this sector and I believe it is a short. Financial institutions have posted miserable top line growth and this bounce has run its course. The recent rally can be attributed to the fact that traders can’t short European banks. US banks were sorted as a surrogate and when conditions improved in Europe, these shorts were covered. I am long puts on financial stocks.

I am also long VIX calls. Bullish sentiment is at extremely high levels and speculators are about to get flushed out. All it will take is one bad European bond auction or a soft economic release from China. For 10 straight quarters, stocks have rallied into earnings and they roll over late in the cycle. The guidance has been weak and this will also create selling pressure as the market approaches a major resistance level.

On days when the market momentum is strong, I am day trading stocks that are at the top of the Live Update table. This has allowed me to offset the carrying costs of my bearish positions. I am not holding these stock positions overnight because I do not want to have the rug pulled out from under me.

Many people are wondering why the Fed is so dovish. I have outlined why I believe they are maintaining a “lose money” policy.

Last week I mentioned that the market has one more good push left. I believe we have seen it.

Late day selling will be the first warning sign. Also watch for stocks that decline after beating estimates. That will be another bearish sign. 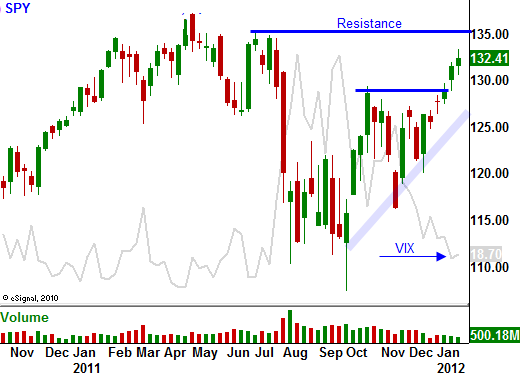