The Market Is Approaching Major Resistance and the Price Action Feels Toppy.

The market is basically flat for the week. On Wednesday stocks rallied to a new relative high after the Fed said that it would maintain its zero rate policy for the next two years. Those gains evaporated yesterday and earnings have not been able to push the market higher. Next week, Asian markets will reopen and trading will be back to normal.

Central banks around the globe are expanding their balance sheets (printing money). They have granted the ECB unlimited access in an “all in” strategy. If Europe fails, we all fail.

This strategy has temporarily eased European credit concerns. Unfortunately, this liquidity infusion only treats the symptom, not the cause. Sovereigns are deeply in debt and entitlement is bankrupting them. Politicians are not restructuring social programs and deficits will grow exponentially as an aging demographic takes its toll.

European banks have been buying sovereign debt for years and they are sitting on a mountain of toxic assets. The ECB had to lower collateral standards so that European banks would have assets to pledge for new loans. In theory, banks would use the loans to buy new sovereign debt. I don’t believe they will make the same mistake twice.

Germany wants Basel III requirements to be eased because they know 21/28 European banks would fail under the new rules.

In 2012, EU sovereigns and European banks need to refinance €250 billion worth of debt. Each week there will be new bond auctions to monitor. As long as the maturities are short-term, the auctions will go well. Longer-term maturities (five years plus) will find soft demand. Next Monday, Italy will auction 5 and 10 year bonds. If the auction goes poorly, interest rates will start to climb.

Most analysts believe that Greece will come to terms with private investors. The haircut will be roughly 65%. I feel the market has already priced in a Greek default so I am discounting any news regarding that country. Traders will watch to see if the ECB can prevent contagion.

European leaders will hold a summit next week. They are supposed to address fiscal reform and they want to add the new policies to the EU treaty by March. This will require a unanimous vote and it will never happen. Half of the countries are already underwater and any meaningful policy would translate into immediate pain. For the time being, the pressure is off (interest rates have pulled back) and Eurocrats will drag their feet. They will not reach an agreement in 2012.

As long as the market believes that the ECB’s bazooka will prevent a financial crisis, the market will move higher. Economic releases have been decent and the calendar will heat up next week. ISM manufacturing, ISM services, ADP employment, initial claims and the Unemployment Report are a few of the major releases.

Today, Q4 GDP came in at 2.8%. That was a decent number, but it missed expectations. Initial jobless claims have been creeping higher the last few weeks and that might weigh on the jobs numbers next week.

We are in the heart of earnings season and the results have not been good. Preannouncement warnings prompted analysts to reduce earnings projections by 50% before the cycle started. Only 60% of companies have been able to beat and that is the worst performance in over two years. Guidance has also been very cautious.

For 10 consecutive quarters, stocks have rallied into earnings season and they have faltered late in the cycle. The market is up against major resistance and I feel stocks are ready to roll over. Bullish sentiment is extremely high and speculators need to get flushed out.

I am long puts in the financial sector and I believe banks will struggle this year. Low interest rates are not good for profits and we can expect additional government regulation. This is a lethal combination and I believe the bounce in this sector has run its course.

I am also long VIX calls. Option implied volatilities are almost at a 1 year low and the first negative event will spark a swift round of selling.

This first decline could set up a decent buying opportunity when support is established. I believe deteriorating economic conditions in China and Europe will take a few more months to manifest. Furthermore, Eurocrats need to drag their feet for a few months to demonstrate that a fiscal reform policy for the EU is nothing more than a pipe dream.

The market action today has a negative feel. I believe we will drift lower but the damage will be contained. If the auctions in Italy go poorly, we could come in to a weak market Monday morning. 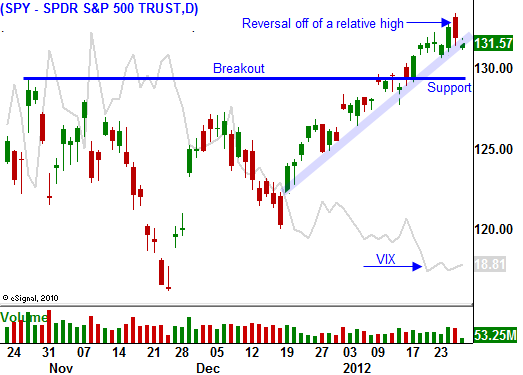