If the Market Closes Below SPY 130, Buy Puts. Price Action Is Toppy

Each year I run a very brief Special Offer in January to celebrate OneOption’s anniversary. We have been in business 6 years and this is your chance to buy all of the research reports for an entire year at one low price. Sign-up Now and save 60%. I recorded this webinar 10 days ago and it reviews all of the products and track repords – Watch the Webinar. This is absolutlely the lowest price of the year. When the promotion ends tomorrow (January 31st) it will not be offered again in 2012. Sign-up now!

Last week stocks were flat and the trading was lackluster. The market tried to break out when the Fed said it would maintain a zero rate policy for the next two years. That move was reversed Thursday and a heavy dose of earnings did not spark a rally.

Asian markets reopened after a week-long New Year celebration. The price action was negative because many traders expected China to lower bank reserve requirements and it did not.

Europe also started off the week on a negative note. Greece has not reached a haircut agreement with private investors. Both sides are confident that this will be resolved quickly. Portugal has become a new focal point. Their credit situation is deteriorating rapidly.

With all of the focus on Europe, Japan has been able to fly under the radar. They have the worst global balance sheet and credit spreads are starting to widen. If Japan’s interest rates rise 1.5%, their total tax revenue will not cover interest expense. Give this statement serious consideration.

Stocks have a tendency to rally into earnings and they declined towards the end of the cycle. We are reaching that point. This week, cyclicals, healthcare and tech will dominate earnings. The most interesting release will come Tuesday after the close. Amazon will post its results and that will set the tone for the retail sector. I am expecting decent results and a good reaction since the stock has been beaten down.

I am not expecting a good reaction for the entire retail sector when the releases start in two weeks. Stores were open longer and the discounts were huge. Higher sales were supposed to offset lower margins and so far, revenues have barely kept pace with the prior year.

The economic calendar is packed this week. ADP employment, Chicago PMI, ISM manufacturing, initial claims, same-store sales, ISM services and the Unemployment Report are the major releases. Initial jobless claims have been creeping higher and that might signal a weak jobs number. The recent improvement could have been seasonal. If job growth stalls, the market will pull back.

Last week I mentioned that the market had one more good push higher and then it would roll over. I also mentioned that we could see selling this morning. Italian bond auctions were fair and the excitement we saw a month ago is starting to wane. Spain and Italy will be holding many auctions in the next few months and longer-term maturities will be met with soft demand.

Bullish sentiment is off the charts and speculators need to get flushed out. I believe we will see a short, swift decline. The market should be able to find support at SPY 125 and I’m not expecting it to spend much time at that level. This pullback will present a good opportunity to sell put credit spreads.

I under estimated the market’s reaction to the ECB’s move. As long as traders believe that this liquidity injection will work, the selling will be contained.

Over the course of a couple of months, Eurocrats will prove that they can’t agree on fiscal policy. Economic conditions will worsen and credit spreads will widen.

China’s economy will also deteriorate. Their growth is very dependent on residential housing and that market is starting to roll over.

By late April, we will see major warning signs and the market will be poised for a sustained decline. Until then, we will see choppy trading with an upward bias. European interest rates will be the key indicator to watch.

I am short financial stocks and I love the position even if credit conditions in Europe are stable. The Fed’s zero rate policy will make top line growth very difficult. President Obama wants banks to refinance mortgages and to eat the cost as a form of repayment to taxpayers. This would be a huge expense and many other regulations are being discussed. This sector has been leading the rally and it is about to roll over.

I am also long VIX calls. Option premiums have fallen to levels not seen in a year. There is too much optimism and bad news can strike at any moment. If the SPY closes below 130, I will add to these positions. If it closes below 128 I will add again.

I did not believe that the ECB’s liquidity injection would restore confidence. I missed the move higher, but I am back on my game. Watch for late day selling and a breakdown. This won’t be “the big one”, but we should see a sharp swift decline. Option premiums are cheap and this is a good time to buy puts. 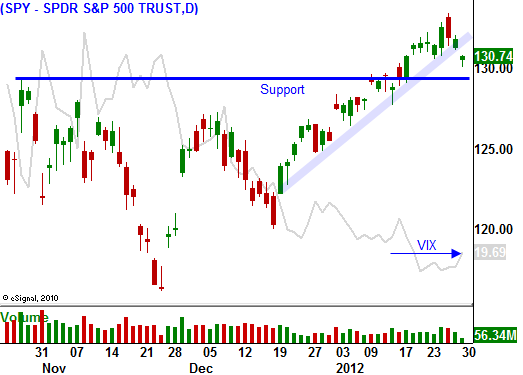