Good News Can’t Spark A Rally – The Price Action Is Bearish. Buy Puts If the SPY Closes Below 130

Each year I run a very brief Special Offer in January to celebrate OneOption’s anniversary. We have been in business 6 years and this is your chance to buy all of the research reports for an entire year at one low price. Sign-up Now and save 60%. I recorded this webinar 10 days ago and it reviews all of the products and track repords – Watch the Webinar. This is absolutlely the lowest price of the year. When the promotion ends today (January 31st) it will not be offered again in 2012. Sign-up now!

Yesterday, stocks took a breather and the market pulled back slightly. A tight range has developed in the last week and major earnings announcements have not been able to push the market higher.

The overnight news should have generated a positive reaction. Eurocrats feel they are close to reaching a fiscal policy pact and China provided a liquidity injection.

Traders were not fooled by the “progress” being made in Europe. Rumor has it that the new fiscal policy will require EU members to keep national debt levels below 60% of GDP. The debt levels will be reduced over time and violators will be charged a penalty of .1% of GDP.

The specifics are still not known, but I’m hearing that there are loopholes galore. The two strongest nations (Germany and France) have debt to GDP ratios well over 85%. If this policy is passed, strict austerity would send the EU into an economic tailspin. Eurocrats are applauding now, but they will sing a different tune when they try to sell this plan to their constituents.

In the US, we have a similar policy that is part of our Constitution. States are not allowed to run deficits. The government has not been able to stop spending and states have more than $350 billion in debt. That number continues to grow annually as public pension funds drain balance sheets. The EU might forge a policy, but like the US, it will be impossible to enforce.

The Peoples Bank of China injected $75 billion in the financial system. This is the most since the financial crisis of 2008. Traders expected a cut in bank reserve requirements and this action was a good substitute. Unfortunately, the market was only up marginally. Earnings in China have been coming in below expectations.

We have reached the halfway point for the earnings cycle. Most of the good news has been factored in and stocks have not been able to rally on the news. The rest of the week will be influenced by economic releases.

The first big news will come from the PMI’s released in China and Europe tonight. China should come in around the flat line (50) and Europe will come in around 49. The improvement in Europe is a surprise and the flash reading came out better than expected two weeks ago. This news should be positive.

ADP employment, construction spending and ISM manufacturing will be released tomorrow. Initial jobless claims have been climbing the last three weeks and that might bode poorly for the jobs numbers this week. Traders will be anxiously watching Friday’s Unemployment Report. They want to see if the recent improvement was seasonal. I believe the jobs number will miss expectations.

This morning, Chicago PMI and consumer confidence declined more than expected. Economic activity feels as though it is stalling out.

The market can deal with an economic slowdown and tough earnings comparisons. It can’t shoulder a financial crisis. For the time being, European credit concerns have been pacified. Rumor has it that the ECB’s balance sheet could grow to €1.5 trillion. This would be three times the size of its peak during the 2008 financial crisis.

Contrary to the market, I don’t see this as a sign of strength; I see it as a sign of weakness. Like Japan and the US, the ECB is accumulating toxic assets. They are the buyer of last resort.

Confidence is growing and traders are numb to Europe. I’m hearing analysts say, “It’s only Greece” and “It’s only Portugal”. This reminds me of 2007 when I heard, “It’s only IndyMac” and “It’s only Countrywide”. This time bomb is ticking. We just don’t know how long the fuse is.

The market is due for a pullback and today’s market action feels bearish. If the SPY closes below 130, add to short positions. If it closes below 128, add more. Bullish sentiment is extremely high and that means a fast and furious decline is possible. As long as the confidence in Europe is maintained, this pullback will be brief. Once bullish speculators are flushed out, Asset Managers will look to buy stocks at lower levels.

I still feel we are a couple of months away from a sustained decline so temper your bearishness. The market is likely to find support at SPY 125. That will set up a decent put credit spreading opportunity.

For now, lighten up on bullish positions and take a more bearish stance. I believe the market will drift lower into the close. 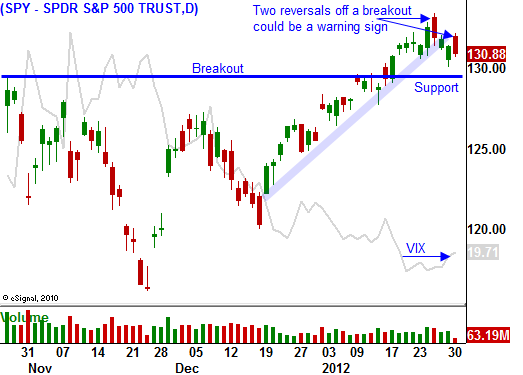