All of the Gains Came Overnight. – No Sustained Buying. Wait For A Breakout From This Range

After a few down days, the market woke up. PMI’s in Europe and Asia were decent and a Greek haircut agreement seems close. Even though the market is challenging resistance, it has not advanced in the last 10 days.

The ECB’s “bazooka” worked and confidence has temporarily been restored. Investors are less fearful of a financial crisis. Some analysts believe that the ECB’s balance sheet will grow to €1.5 trillion in 2012 (biggest ever). Central banks around the world are backing the ECB and this is an “all in” strategy. If Europe fails, we all fail.

Risk has not been eliminated; it has simply shifted to the ECB’s balance sheet. European banks are pledging sovereign debt in exchange for new loans. That money is being used to refinance expensive debt, beef up bank balance sheets and to purchase more sovereign debt.

Entitlement programs are draining sovereign balance sheets and deficits are growing at an alarming rate. Credit ratings will continue to deteriorate over time.

A European summit is being held this week. They have drafted a plan that looks great on paper. Sovereign debt levels will be scaled back to 60% of GDP. Any member that violates this policy will pay a penalty equal to .1% of GDP. The timeline and other specifics are unknown. The two strongest countries (Germany and France) have debt levels in access of 85% of GDP. This plan is nothing more than lip service and the market barely rallied on the news yesterday.

We have similar policies in the US that are never enforced. Take the debt ceiling for instance. We keep spending money and as soon as we hit it, we raised it. According to the Constitution, states cannot run deficits. They are more than $350 billion in the red and growing.

Politicians don’t have the “stones” to reform entitlement programs. An aging population will accelerate deficit spending in coming years. The largest, most developed geographic areas (North America, Europe and Japan) have the highest debt levels. We are backing each other with our respective worthless currencies knowing that if one of us fails, we all fail. Collectively, these areas account for 75% of the world’s GDP.

The ECB is using European banks as a conduit for sovereign debt purchases. Their balance sheets are weak because they have been buying toxic debt for years. Their appetite for longer-term maturities is waning and it’s just a matter of time until they selectively boycott specific auctions. Initially, the problem could be contained to Greece, Portugal and Hungary. Eventually it will spread to Italy and Spain.

A few weeks ago, the CEO of Société Générale said that they will not be actively participating in sovereign debt auctions. He does not feel that European banks should be the “buyer of last resort”. In the next two months, Italy and Spain have €150 billion worth of debt to refinance. I will be watching for signs of strain.

Today, ADP employment showed 170,000 new jobs were added to the private sector in January. While that is a decent number, it is down substantially from December. ISM manufacturing came in at 54.2. That was slightly higher than the December number, but it missed expectations. Chicago PMI was released yesterday and it also missed expectations. Home prices have continued to decline according to Case-Shiller.

Initial jobless claims have been creeping higher the last few weeks and that might be a negative sign for Friday’s Unemployment Report. The consensus estimate is 170k new jobs. If we come in at 150k or below, the market will have a negative reaction.

I can’t turn on CNBC without hearing the words “golden cross”. Statistically, the market moves higher after the 50-day MA moves over the 200-Day MA. These are long tem moving averages and it does not mean a move higher will happen immediately. From my perspective, this just excites bullish speculators even more. Sentiment is off the charts and I still believe we are setting up for a sharp, swift decline. It will flush bullish speculators out and Asset Managers will buy the dip.

For now, the market is in a “happy place”. Credit concerns have subsided and economic activity is stable. Corporations have been very prudent and they have strong balance sheets. Stock valuations are cheap and many companies are using cash reserves to buy back shares. This is a great reason for stocks to move higher.

Today’s move feels great, but the gains were realized in the first few minutes of trading. In the last 2 hours, stocks have barely moved. This is not typical of a market that wants to push higher. If we saw sustained buying throughout the day and a close on the high, I would be getting excited.

The market is up against major resistance at SPY 135. We are at the mid-way point of earnings season and good news is priced in. I can’t see the source of the next bullish catalyst, but I can see some potential speed bumps. Rising interest rates in Portugal, widening credit spreads in Japan, declining real estate prices in China and/or a poor bond auction in Italy/Spain would spark fear.

I still feel we are a couple of months away from a big decline, but I am looking for a swift 5-7% retracement.

I am short financials and long VIX. I am only day trading from the long side to offset the carrying cost of my bearish positions and today’s train left without me. I will watch from the sidelines and I want to see if the momentum can build throughout the day. Late day selling would be a warning sign. 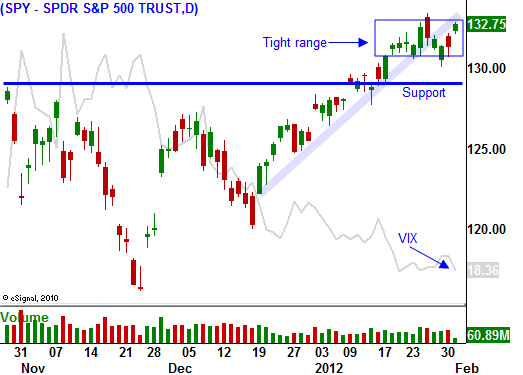