Jobs Number Looking Like A Non-Event. Lackluster Trading – Wait For A Breakout

For the last two weeks, the market has been caught in a tight trading range. A week ago, the Fed announced the continuation of their zero rate policy through 2014. Stocks surged to a new relative high, but those gains were erased the next day. Yesterday, the market gaped higher on the open and it challenged that high midday. Profit-taking set in late in the day and resistance held.

Yesterday’s gains all came overnight. During the first couple of hours, stocks barely budged. If investors were still trying to get long, we would have seen a gradual climb higher throughout the day. Instead, the market ran up and drifted lower. We closed right where we opened and this shows a lack of conviction.

The overnight news is very light and we are likely to see lackluster trading ahead of the Unemployment Report. Initial jobless claims came in at 367,000 and that was in line. The ADP employment report was also in line yesterday. Traders are looking for 170,000 new jobs in tomorrow’s report and that number should come in as expected.

Global PMI’s came in as expected and that provided a small boost to the market this week. Bond auctions in France and Spain saw fair demand and interest rates barely budged. These maturities were less than five years and shorter-term auctions should continue to go well.

Greece has not reached a haircut deal with private investors. They haven’t even crossed this hurdle and the IMF is already clamoring for more cuts. Portugal’s interest rates spiked higher this week and unemployment in Spain climbed. For the time being, credit fears in Europe have subsided.

The ECB is flooding the market with money and banks are no longer on the ropes. The ECB will continue to relax banking requirements to give them breathing room. This exercise reminds me of an incompetent teacher who lowers the curve so that more students can pass. Their grades look better, but the students aren’t any smarter.

In the case of European banks, the problem has not gone away. Risk has been shifted over to the ECB and they are holding onto a mountain of toxic assets. The ECB’s balance sheet could grow to $1.5 trillion in the next couple of months. That is three times the size of its balance sheet during the financial crisis in 2008.

The difference between financial institutions in the US and Europe is that we took huge write-downs in 2009. Banks sold assets and they raised private equity. By comparison, our balance sheets are very strong.
European banks barely raised capital and they took small write downs. They also invested heavily in sovereign debt. Those assets continue to sour and the risk exposure to sovereign defaults is high. As long as European bond auctions go well, credit concerns will be pacified.

There weren’t any major earnings announcements overnight. We are halfway through the earnings cycle and good news is priced in. I believe we are due for a swift pullback in the next few weeks. That move will flush out bullish speculators and it will eventually attract Asset Managers.

The market is searching for direction and I don’t see any bullish catalysts that will push it through major resistance.

Look for a tight trading range today with a small upward bias. I am short financials and long VIX. I will day trade a few stocks today from the long side. My strategy is simple I am looking for stocks at the top of the Live Update table that are breaking out. Avoid those that had monster earnings gaps and focus on the stocks that are grinding higher.

This strategy has been working fairly well and it sets me up for a decline. If the SPY closes below 130, I will add to bearish positions.

Yesterday we saw late day selling. If this becomes a pattern, it would be a bearish sign. 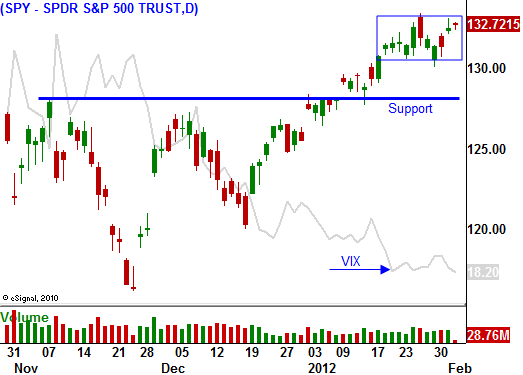