Last week, the market broke out above resistance when the jobs report came in much better than expected. PMI’s in Europe and Asia were also above estimates. This is a very quiet news week and the momentum should allow stocks to inch higher.

Domestic economic conditions have been outpacing the rest of the world. ISM manufacturing and ISM services came in better than expected last week and GDP rose 2.8% in the preliminary reading. The optimism is growing.

Credit concerns in Europe have subsided. The ECB provided a massive liquidity injection and interest rates have declined. Greece has not reached an agreement with private investors and the market doesn’t seem to care. Traders have become numb to the news out of Europe.

Stock valuations are cheap at a forward P/E of 13. Balance sheets are strong and low interest rates are forcing investors to take greater risks. If conditions remain stable, we could see a rotation out of fixed income and into equities.

I’ve just painted a very rosy picture for the market, but there is another side to this coin.

Earnings season is more than half over and stocks typically pull back in the later stages of the cycle. Analysts lowered estimates by 50% due to pre-announcement warnings. Only 57% of the earnings releases have exceeded estimates even though the bar was lowered. This is the worst showing in over two years.

The PMI’s in Europe and Asia might have been better than expected, but they were still weak (right around 50). Germany is treading water, but the rest of Europe is in a recession. China is very dependent on construction spending. Real estate prices and unit sales have been down the last three months. They could be headed for a housing bubble and a hard landing. If China’s economy rolls over, the market will decline regardless of what’s happening in Europe.

Some analysts believe that a Greek default is priced in, but the actual event will raise fear when it happens. Interest rates in Portugal are spiking and conditions in Hungary and Belgium are dire. As we saw in November, credit conditions can deteriorate very rapidly.

The jobs number last Friday looked fantastic. However, there were labor force adjustments that resulted from the Census Report. Not all of the gains came from hiring.

I have been trying to temper my bearishness, but I still see trouble ahead. I am buying calls on cyclical stocks and I am buying VIX calls as a hedge. If the market continues to move higher, the VIX won’t decline much from these levels. The gains on my long positions will outpace the losses on my VIX calls. If the market reverses sharply, I will sell the equity calls I own and I will hang on to the VIX calls.
An alternative strategy is to own calls on strong stocks and to hedge the position with puts on weak stocks. The basket of positions should have a bullish weighting. Use the Live Update table in the DAILY REPORT as your guide and focus on the stocks that are at the top of their respective lists.

There are a few minor economic releases this week and an ECB meeting. Earnings are winding down and the price action could be lackluster. Look for quiet trading and a slightly positive bias this week. 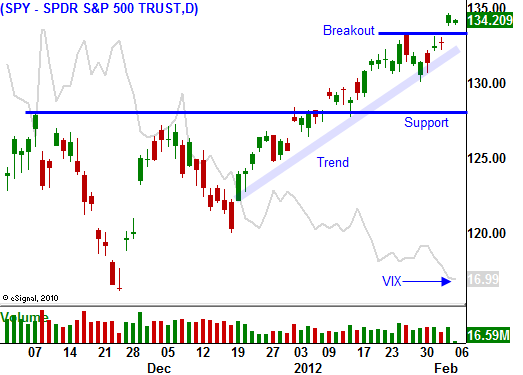