Fed Speak and the ECB Should Provide A Small Bid. Quiet Week Ahead

This has the makings of a very quiet week. Earnings season is winding down and the economic releases are light. Stocks have good momentum, but the market is bumping up against major resistance.

Greece has not reached an agreement with private investors and that is weighing on the market. Unions across the country are striking and that is making investors nervous. Greek officials are trying to draft austerity measures that would lay off 15,000 public sector workers by the end of 2012. The minimum wage would be cut by 20% and they are also trying to reduce pension benefits by 20%. These talks are strained.

Germany and the IMF are concerned. They feel that Greece could agree to austerity measures and retract them as soon as they get the money. There is talk of an escrow account where the IMF would pay creditors and government bills. If austerity measures are retracted, the money would go away.

Financial markets are based on trust and there doesn’t seem to be much within the EU. For now, investors are satisfied with the ECB’s liquidity injection and credit concerns have subsided. As long as these seas are calm, the market can inch higher.

Earnings are decent, but not fantastic. Estimates were reduced by 50% and a little more than half of the companies have “beat”. This is the worst showing in two years. Towards the end of the earnings cycle stocks have a tendency to pull back because all the good news is priced in. I believe we have reached that point.

Market gains from this point forward will be hard-fought. Bullish sentiment is extremely high and we could see a swift pullback. I say swift because I feel stocks will snap back. Asset Managers don’t want to chase stocks, but they would certainly buy at lower levels.

The Fed Chairman will testify before Congress today. Armed with a strong jobs report, the rhetoric should be positive. Thursday, the ECB will release its statement. It fired its “bazooka” two months ago and that strategy resulted in lower interest rates. Their commentary should also be positive.

Tension in the Middle East is building, but I don’t believe it will impact the market unless military action is taken.

With the Euro credit crisis temporarily off the table and with earnings season winding down, I believe the focus will shift to economic releases. Traders will be watching conditions and China and Europe very closely. If activity stabilizes, the market will grind higher. Conversely, if numbers start to soften, bullish speculators will get flushed out in a swift pullback.

As I mentioned yesterday, I am buying calls and I like cyclical stocks. I’m keeping my size relatively small because I don’t trust this market. I am also long VIX calls as a hedge. If the market rolls over, I will sell my long call positions and I will let my VIX calls kick in. A close below SPY 132 would be mildly bearish. I don’t see this market pulling back more than 5-7%.

Look for quiet trading this week. Fed speak and the ECB should provide a small upward bias.
.
. 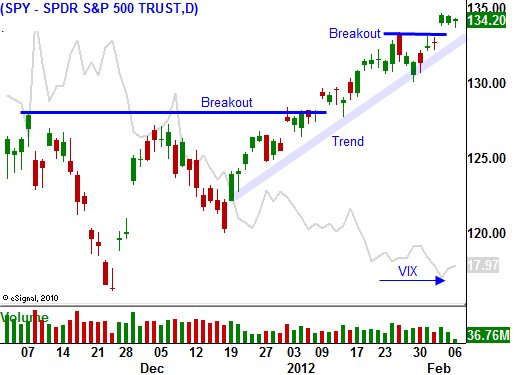