Last week, the market was able to break out to a new relative high on better-than-expected economic releases. It rests just below major resistance at SPY 135 and traders are waiting for the next catalyst. European credit concerns have waned and earnings season is winding down. That means the focus is clearly on economic growth.

ISM manufacturing, ISM services and Q4 GDP all exceeded expectations. Initial jobless claims have been drifting lower (-15,000 today) and last week’s Unemployment Report showed that 243,000 jobs were added in January. Not all of the gains came from hiring (Census adjustments were made) and it wasn’t quite as good as it appeared. Nevertheless, economic conditions in the US are improving.

The calendar is light for the next 10 days and stocks are likely to fall into a tight trading range. Flash PMIs from Asia and Europe will not be posted for another two weeks. Tomorrow, China will report its trade balance. The Minister of Commerce indicated that exports might be soft.

Today we learned that China’s inflation came in a little hotter than expected (4.5%). That comes as a disappointment to those who expected easing. Bank reserve requirements will not be lowered in the near future.

European credit concerns have eased and the ECB’s “bazooka” worked. Interest rates have declined and Spain is even considering a syndicated bond offering. This morning, the ECB left rates unchanged and they said that European banks will get to drink from the trough on February 28th. That’s when they will allow banks to borrow unlimited three-year funds at 1%.

In November, European banks borrowed almost €500 billion. The ECB’s balance sheet is bigger than it was during the financial crisis of 2008. Banks ran out of eligible capital so that ECB lowered collateral requirements. I don’t see this as a healthy sign. Flush with liquidity, the ECB is expecting European banks to support sovereign bond auctions. Banks are staying on the short end of the yield curve and I believe longer-term maturities will be met with soft demand.

Earnings season is winding down and decent results are priced in. Expectations were reduced by 50% and a little more than half of the companies have been able to beat. Earnings growth is in the high single digits and this is the worst quarter in two years.

Companies are making money and balance sheets are strong. Stocks are trading at a forward P/E of 14 and they are attractive relative to bonds. As long as European credit concerns are pacified, stocks will move higher.

Today, Greece reached a deal with private investors and that should boost confidence. This will be a never-ending saga and we will have to deal with it month after month.

So here’s where we stand. Market conditions are conducive for a rally, but Asset Managers don’t want to chase stocks. A trading pattern has been established this week. Stocks drift lower early in the day and they rebound late in the day. That tells me the bid is strong. Investors that got on board early are taking profits when the market hits resistance. With these two opposing forces, stocks have fallen into a tight trading range.

Towards the end of April, we will be vulnerable to a sustained decline. I believe economic conditions in Europe and China will deteriorate. Longer-term European bond auctions will go poorly and interest rates will creep higher.

Given my longer-term bearish outlook, I don’t trust this rally. I can only participate using a hedged approach. I am currently long equity calls and long VIX calls. If the market gaps through resistance my bullish positions will more than offset the losses on my VIX calls. Option implied volatilities have stabilized at levels not seen in a year. If the market breaks down, I will wait for support and then I will sell my VIX calls. The gains on my VIX should offset some of my losses on my equity calls. I am looking for a quick bounce and I will buy calls on that decline.

I consider this to be “no man’s land”. Asset Managers are waiting for a dip and the market is up against major resistance. The news calendar is light and we could be in this range for a week or two. Keep your positions small and use a hedged approach. You can also buy calls on strong stocks and puts on weak stocks in a 3:1 ratio. Use the Live Update table in the DAILY REPORT as your guide. Give yourself time and go out to March to avoid February time decay. I would not sell premium. Option implied volatilities are cheap and you are not being properly rewarded.
. 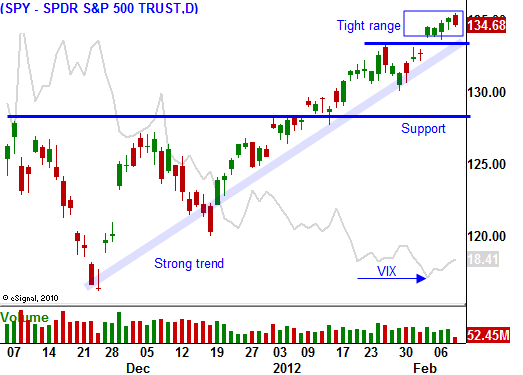