Traders Are Testing the Strength of the Bid. Stocks Should Rally and Erase Most of the Losses Today

Every time stocks retreat, you know the source of the problem. Credit concerns in Europe are flaring up a bit this morning. Eurocrats rejected Greece’s austerity package and the March 20th deadline draws near.

Europe’s finance ministers want the austerity package to pass through Greece’s parliament before they give it a “thumbs up”. Even then, they will question whether or not Greece will follow through on the plan. Greece will hold elections in April and the new Prime Minister might not honor previous agreements. The troika wants Greek officials to promise that they will follow through regardless of election results.

I’m also hearing rumors that the ECB/IMF might set up a bailout escrow account for Greece. It would be used to pay bills and creditors. If they do not honor their promises, the money will be yanked. The tenor is serious and trust has become an issue.

From a trading standpoint I believe today’s news will blow over. Towards the end of February, the ECB will provide another liquidity injection. European banks will be able to borrow three-year funds at 1%. This maneuver calmed nerves in November and it will probably work again.

France will hold elections in April and politicians want smooth sailing for the next two months. It is the second-largest EU member and it will do everything it can to keep the lid on credit concerns.

There are bond auctions in Italy and France next week. I am expecting them to go fairly well, but interest rates could inch higher. This should not have a major negative impact on our market.

China posted a number of economic releases overnight. Exports were in line, but imports were a little soft. Yesterday, inflation was a little hotter than expected and that weighed on their market. China won’t be as quick to lower bank reserve requirements if inflation remains high.

Washington will fight over the extension of payroll tax credits. They expire in February and Democrats want them to last the entire year. President Obama will also release his budget. He plans to trim a “whopping” $300B annually and most of that will come from tax increases (terminate the Bush tax credits).

President Obama will also draft a plan to increase corporate taxes on overseas profits. He plans to provide incentives for domestic investment, but he will punish corporations that move jobs overseas or keep profits abroad. If the incentives are greater than the regulatory costs, wages, taxes and health care expenses, the plan would work. If not, corporations will simply move their headquarters overseas as they have been doing the last five years (at an increasing rate).

The government should be paving the way for corporations, not putting up roadblocks. We currently have the second highest corporate tax rate in the world. Jobs are the cornerstone to economic growth and this proposal could seriously backfire.

Earnings season is winding down and it won’t have much of an impact. Retailers will start posting results next week and I believe profits will be meager. Stores were open longer and that will increase expenses. Deep discounts will also bite into profit margins. Revenues have been decent, but not to the extent that they will offset higher costs.

The economic news is fairly light next week.

There is nothing in today’s headlines to justify the decline we are seeing. I believe good news is priced in. The market and it has not been able to break out above major resistance at SPY 135 and traders are trying to see if they can get something going in either direction.

The market is overbought and bullish sentiment is very high. Normally, this would set up for a swift pullback as they get flushed out. Asset Managers don’t want to chase stocks at the top of the range, but they will buy pullbacks. We could be in a tight trading range for a few weeks.

I am currently long equity calls and VIX calls. This is a hedged position and I’m keeping my size small. There is no reason to have a big position at this time. I consider this to be “no man’s land”. The market could pullback or it could break out on the right news.

As for today, I believe the market will stabilize and we will see an afternoon rally that will reverse most of the losses.
. 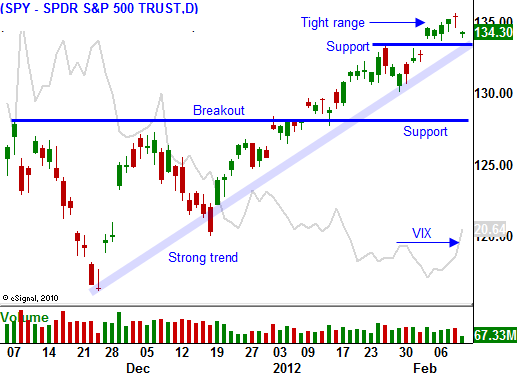