News Is “Heavy” – Market Does Not Care. I Will Wait For A Better Entry Point

Yesterday, the market surged higher on news that Russian troops in Crimea returned to their bases. The Ukrainian crisis is being ignored by the market and a favorable resolution is priced in. For that matter, the market doesn’t care about other headwinds either.

This morning, ADP came in lighter than expected (138K versus 155K expected). ADP has been outpacing the Unemployment Report and this does not bode well for Friday’s number. Bulls will be asked again to ignore weak economic data. Horrible weather conditions might not account for the entire decline in activity.

GDP and durable goods came in weaker than expected last week and initial claims inched higher. ISM services came in a 51.6 vs. expectations of 53.5. Overall, the domestic releases have been bearish and we will get a look at the Beige Book this afternoon.

The Fed safety net has been removed and the market doesn’t seem too concerned. Janet Yellen said that a substantial economic decline would be required for the Fed pause tapering. This is consistent with the FOMC minutes.

China’s PMI came in weaker than expected on Monday and the market shrugged off the news. Today they reported their first corporate bond default. Japan is concerned that their plan to devalue the Yen has not increased exports.

The situation in the Ukraine is one stray bullet away from a crisis. A conflict would have an economic ripple effect.

I missed this rally, but I’m not going to chase. There are enough issues to contain the excitement. If the market gets ahead of itself, profit taking will set in.

I’ve been mentioning that we are likely to take two steps forward and one step backwards this year. I will wait for the next dip.

If the rally gains traction, I will day trade from the long side. However, I won’t take any overnight long positions.

This is been an excellent year already and I don’t want to give my profits back. If I can get in on my terms, I will.

Most of yesterday’s gains came in the first 15 minutes. The participation was broad, but the volume was light.

Momentum is carrying the market higher today. I believe the gains will be relatively small after a big run. I would not be surprised to see late day selling.
.
. 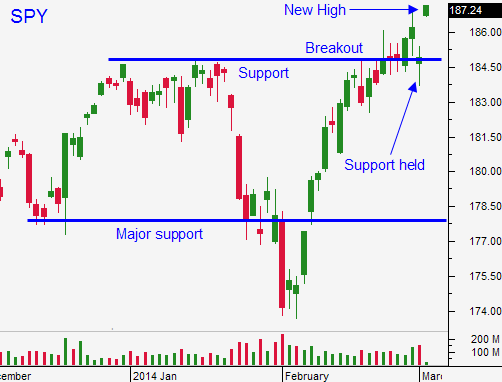