Early weakness yesterday morning was shrugged off and the market surged above SPY 141. For a moment it looked like the bulls were going to win the battle. I mentioned that I would need to see a convincing close above that level before I would turn neutral. That is not some secret black box level, it is known to everyone. I feel that technical breakouts/breakdowns are significant when other traders feel the same way. In yesterday’s case, the market wanted to chase people out of their positions. The big jump was the result of conditional orders that were triggered. Once they filtered through the market, prices gradually drifted back down to SPY 141. It has yet to be determined if the bulls or the bears will win. Of interest is the sentiment change. Last quarter, GS blew away the numbers and created massive buying going into the December quad-witch. Today they exceeded estimates by more than 30% and the stock is barely up. It is $15 off of its high a few weeks ago, it trades at a low P/E and I felt it had room to run. Retail sales were released today and the market sold off when it saw the numbers. Last week, retailers released weak same store sales and the market yawned. I feel the sentiment may be changing. I’m short-term bearish and I felt that if the bears could get past the GS earnings there was a chance for a sell-off. GS has consistently outperformed and they do not have sub-prime exposure. BSC and LEH release this week and they do. I believe the losses in that area will be offset by earnings in other areas like they were for HBC. However, the upward momentum for this sector will have stalled. Financials have been leading the market higher and they represent 20% of the SPY. It will be difficult for the market to make new highs without these stocks. Today I included a chart of the QQQQ. You can see that tech stocks have not bounced much off of their low last week. The other wild card this week is the PPI/CPI. The market has already priced in a 50% chance that the Fed will lower rates in July. Inflation concerns have subsided and the greater risk lies in a “hot” number. If the bulls can erase the early losses today, there is a chance for a breakout. Since I’m short-term bearish, I feel that the attempt will fail and the market will test the downside this afternoon. I continue to be long puts. If the market breaks below SPY 138, I will add. If the market closes convincingly above SPY 141, I will sell my puts and go to cash. 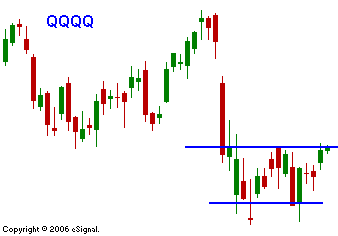