The stock market is chopping around after last week’s nasty sell off. I still believe support will be tested and my stock option strategy is to buy diagonal put spreads.

There aren’t any economic releases or earnings announcements that will significantly impact trading. The end result is volatile price action.

Yesterday, cyclical stocks were hit hard. The SPY briefly tested a support at 140. By the end of the day it was able to bounce off of that level. The late day rally got many traders thinking that the temporary lows are in. On the open, the market gapped higher and it looked like they might be right.

After the first hour of trading, the market gradually drifted lower and tested the downside. As you can see in the chart, there have been many intraday reversals the last two days. In a broader sense, this market decline is not like the one we saw in February or August of 2007.

The declines in February and August were very sharp and swift. The snap back rallies were strong and once the market established support, it never looked back.

This decline started in October and it has been steady and methodical. It has taken the market longer to establish a new relative low and a series of lower highs has formed. Each subsequent bounce has been weaker and the market has easily pulled back to retest support.

Don’t look for a quick snap back to this market. The Fed’s rate cuts lack punch and the rallies are short-lived. There are deep-seated issues that need to be resolved. Last year corporate earnings grew at a 2% rate compared to 8% in 2006. That growth rate is likely to slow even further as wholesale prices and rising labor costs bite into profitability.

The stock market is chopping around today. I still beleive the support will be tested in the next few days and my stock option strategy is to buy diagonal put spreads.

This earnings season will require excellent stock picking. I will be looking for the most profitable companies in sectors that have been beaten down. On the bearish side of the coin, I will be looking to short companies that trade at high P/E ratios where a “big number” is already factored in to the stock price.

The market could stage an oversold bounce today; however, I believe that over the course of the next few days you will want to be short. Next week, many firms will release earnings. The financial stocks will dominate the scene and given their recent performance, they are likely to generate additional selling pressure. I am not looking for a bloodbath, but if SPY 140 fails, we are likely to test the 137 level (the lows from the March and August sell offs).

Buy put diagonal spreads if the market breaks below SPY 140. You will want to buy closer to the money March puts and sell one strike farther out January puts. This will allow you to establish a longer term bearish position and to offset the cost of higher IVs by selling January options. 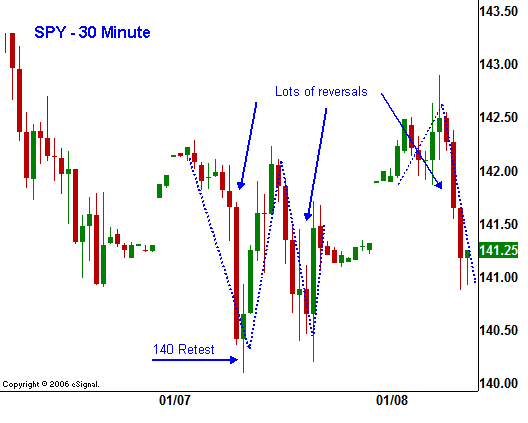