The path of least resistance for the stock market is down. Option trading should include the purchase of put diagonal spreads

Since Friday’s unemployment number, the market has been unsuccessfully searching for good news.

Yesterday, an early rally quickly faded and by the close, prices were sharply lower. The market broke below the lows set last March and August. Many technical support levels have been breached. The most significant are the five-year up trend line and the 200-day moving average.

Today, an early rally has given way to more selling pressure. Goldman Sachs lowered their 2008 GDP estimates to .5%. They also raised their estimates for the unemployment rate to 6.25%. Tomorrow, US retailers will report their sales figures and analysts expect a gain of about 1%. Those results are dismal compared to the 3.3% gain posted a year earlier.

Overnight, European markets followed our decline. The tone was set by British retailer Marks & Spencer after they reported that declining same store sales were caused by a credit crunch that has hit consumer spending.

There is a lack of earnings and economic news this week and that will work to the detriment of the market. The storm clouds are brewing and buyers have put their wallet back in their pockets. Next week, we will get an onslaught of economic data. The PPI and CPI will be carefully watched. If inflation continues to rise, it will temper the Fed’s action in two weeks. Industrial production, the Philly Fed, and the LEI will also reveal economic activity.

The week will also include major earnings announcements. Financial stocks will dominate the scene. I am expecting weak performance and uncertainty.

The market is oversold and I believe we could see an intermediate low next week. However, do not look for a “V Bottom”. There are deep-seated issues that need to be resolved. You can look for the strongest stocks within their respective sector that have been dragged down. They might provide a nice upside trade. The keyword is trade. Do not overstay your welcome since any decent market bounce will eventually stall. I believe March and April will continue to see selling pressure.

For today, I still like buying put diagonal spreads on weak stocks. The implied volatilities of the January options are high and I want to sell out of the money puts. I am using those proceeds to partially offset the purchase of closer to the money, farther out in time – puts. For instance, if a stock is at $70, I might buy the March $70 put and sell the January $65 put. If I can’t get enough of a credit for the January $65 put, I consider selling a February $65 put.

Expiration week is likely to be very volatile with all of the news releases. I’m expecting weakness for the next few months littered with a number of short covering rallies. 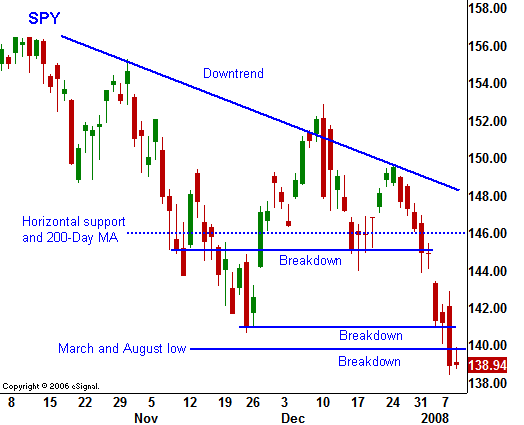