The stock market needs to establish a capitulation low before you can think about option trading. The market is too oversold to short and the IVs are high. The pattern of higher opens and lower closes is still bearish. When a low is established, there entry points for new trades will become clear.

What a brutal week for the bulls. Tuesday, Wednesday and Thursday marked the biggest three-day decline since 2001. The storm clouds have been brewing and those of you who watched my 2008 market forecast video know that I have been bearish.

The table was set for a nasty week. The market was near a one-month low which indicated that option expiration selling could kick in. Furthermore, the earnings scene was dominated by one of the weakest sectors – financials. The massive write downs continued and mortgage insurers were downgraded. Merrill Lynch took a $16 billion write-down demonstrating that the depths of this crisis are largely unknown.

Thursday, the Philly Manufacturing Index was horrible and it preceded the Fed Chairman’s testimony before Congress. As soon as he opened his mouth, the market tanked. Ben Bernanke painted a very bleak economic picture and he emphasized the need for immediate monetary and fiscal stimulus. Traders expect and intra-meeting rate cut and they will sell this market if they don’t get one. It’s time for the Fed Chairman to put his money where his mouth is. I thought we might get an over-night rate cut Friday and judging from the negative reversal, other traders thought the same. Mind you, these are my observations. I do not want to see a rate cut because I do not believe it will correct the problem. It will crush the dollar and that has its own set of problems.

There may be light at the end of the tunnel. Next week we will get a much broader mix of earnings releases. I believe that investors will see that there are areas where money can be confidently allocated. I also believe that the Fed will lower interest rates ahead of their meeting. Last week, many of the market leaders were nailed during the decline. That is one of the signs that we are near a capitulation low. The VIX is climbing and it is also near the highs from August and November. That indicator measures the cost of portfolio insurance. When fear is at its highest, the market has a chance to form a base.

I am not bullish; however, I do feel that there is a tradable bounce that will materialize in the next week or two. Once that rally exhausts itself, it will be time to look for bearish opportunities again. 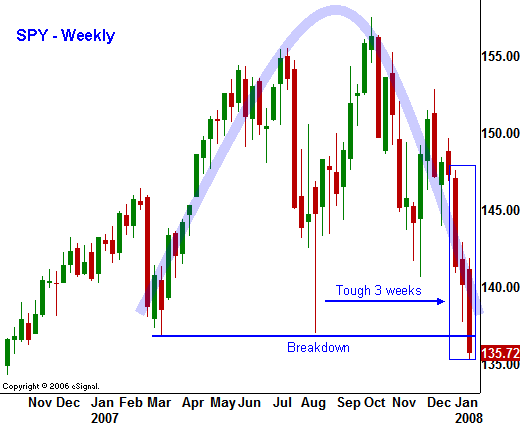