For those who wonder if big government is good, that question has been answered today. We have a sub-prime crisis that affects millions of homeowners and Congress is grilling Roger Clemens to find out if he used steroids 10 years ago. There is nothing like a televised “witch hunt”. I’m glad we are spending hundreds of thousands of dollars to get to the bottom of this.

On a more positive note, the stock market is responding well to the retail sales number and business inventories number. Both came in better than expected. As I mentioned yesterday, the market needed to hold its gains going into the close. The bears tried to push the market down late in the day, but it sprang back in the last half hour. Today’s rally is adding to those gains and it may be time to buy some call options.

I have been referencing the August decline. After a capitulation low, the market staged a shallow rally and at retested a relative support level. Once it did so, a legitimate moved higher materialize. That is the exact juncture we are at. The market established its capitulation low and rallied out of the trough. Last week, it retested the SPY 132 level. This week, we have seen a rally off of that support level and continuation today.

If the market is able to finish higher today, I believe option expiration sell programs will be muted. I also believe that the Fed Chairman will tread cautiously when he testifies before Congress tomorrow. He knows that the credit situation is dire and he also knows that the Fed rate cuts have not generated the confidence he had hoped for.

The fact that Warren Buffet tabled a bond insurer bail out indicated that there was money on the sidelines that could be put into action. This proposal was a relatively safe bet and he was simply looking to buy good assets – cheap. This action would have allowed bond insurers to maintain their AAA rating. None have accepted his offer and one company rejected it. Regardless, it sends a signal to the market.

I am expecting a sustained move towards the SPY 140 – 144 range in the next two weeks. We are likely to trade between SPY 130 – 145 for many months while the credit issues are resolved.

For now, I like energy, agriculture, mining and tech. I am short term bullish and I will take profits as the rally runs its course. If the market falters, I will use SPY 134 as a stop. Notice, I am gradually raising my stop as the market moves higher. 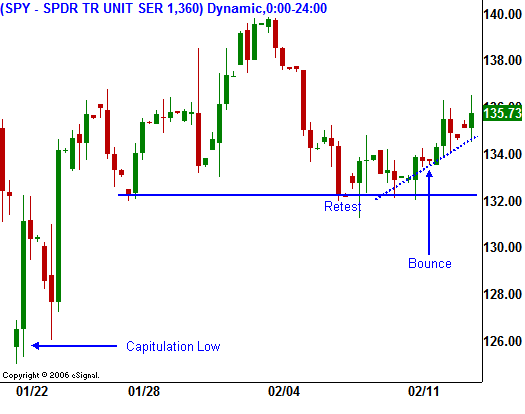