Market May Have Formed A Double Bottom – Here’s Why.

This week started off with a huge stock market decline and one of its largest single-day rallies ever. In 20 years, I can’t recall option trading conditions like this.

A week ago Monday, the Fed granted banks access to $400 billion in US treasuries. They were required to pledge AAA rated mortgages as collateral for the loan. That news was well-received, but the ensuing rally quickly ran out of steam.

This privilege should have been extended to investment banks. Over the weekend we learned that Bear Stearns was in dire straits. Knowing that the failure of an 85-year-old financial institution would wreak havoc on the markets, the Fed guaranteed $30 billion of subprime loans and quickly arranged a take over by J.P. Morgan Chase. They simultaneously lowered the discount window rate by .25%.

Financial stocks plummeted on Monday ahead of their earnings releases. After watching a stock with an $80 book value fetch $2, investors were not going to get burned twice. As the numbers were released Tuesday, the news was good and solvency was not an issue. Goldman Sachs and Lehman Brothers staged huge rallies and massive short covering took place. In the afternoon, the Fed lowered interest rates by .75%. The market took comfort knowing that progressive steps were being taken to protect our financial integrity and it rocketed 50 S&P 500 points higher.

Wednesday morning, Morgan Stanley beat expectations and the government loosened the strict capital requirements on Fannie Mae and Freddie Mac. Now, the nation’s two largest mortgage lenders can inject billions of dollars into the sagging housing market. Their capital surplus requirement was reduced to 20% from 30% and this effectively added $200 billion of liquidity.

Both of the huge bear market rallies in the last two weeks were followed by offsetting declines. On the bearish side of the coin, unemployment is rising (Thursday’s jobless claims were up) and the economy is weakening. The longer term technicals are also weak.

On the bullish side of the coin, some of the largest investment banks reported earnings, smaller write downs and good reserves. The Fed has stepped up to the plate and they have demonstrated a willingness to do what ever it takes to avoid a financial disaster. Uncertainly and the chance for a financial collapse fueled fear and that panic has been subdued this week.

Financial stocks and the market have formed a significant support level. We have successfully retested the capitulation low from January and if the market can rally above SPY 135, it will have broken a downtrend line. A rally above SPY 139 would signify that a minor horizontal resistance level has been overcome. These two events would strengthen the double bottom support level that has formed. If the market can sustain a rally, it can buy much-needed time to sort through this credit crisis.

During the last quarter, if you backed out financial sector, the S&P 500 stocks posted an 11% earnings growth rate. That is a very solid number and that should help to support the market. Financial stocks need to heal and this week they just bought some time.

It is too early to jump in and buy this market, but I suggest paring back your shorts and lifting some of your hedges. In my 20 years of trading I can’t recall this level of two-side action.

Keep your powder dry going into the weekend and spend time on research. 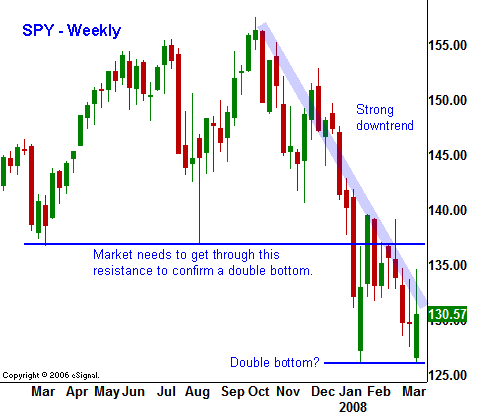