After a long holiday weekend, the market is off to a positive start. Last week, the market rallied after the .75% interest rate cut by the Fed and the positive news from Goldman Sachs, Lehman Brothers, and Morgan Stanley. The bears took those gains away on Wednesday, but the bulls were back in full force during Thursday’s quadruple witch. As I’ve been mentioning, the market needs to get through SPY 135 to legitimize the double bottom.

Over the weekend, J.P. Morgan Chase increased its bid for Bear Stearns to $10 a share. This was viewed as a major positive for all financial stocks.

This morning, existing home sales and rose 2.9% in February, breaking a six-month decline. Unfortunately, median home prices declined by 8.2% from a year ago (the sharpest drop since 1968).

I like the rally that we are seeing and the market has been able to follow through. However, it will run into stiff resistance at SPY 139. At this juncture all I am willing to say is that a bona fide support level has been formed at SPY 125.

This bear market rally has taken many shorts I surprise. In the last five days, the market is almost rally 100 S&P 500 points from its low.

As this market regains its footing I think it is time to look at tech stocks. Many have strong cash balances and the QQQQ has formed a solid base compared to the SPY. I alos like commodity stocks. Metals (excluding gold) and agriculture look strong. I would let energy prove that it has found support before getting in. The oil rally above $100 seemed over-done. 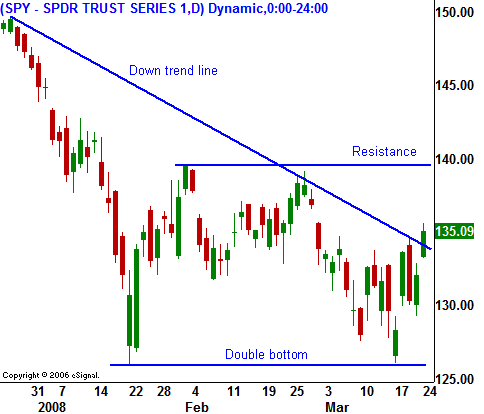