Don’t Get Cute In Your Option Trading – This Rally Is Why I Didn’t Short The Pullback!

For the last 10 days I have been suggesting that you lighten up your longs, but don’t get short. As an option trader, you can’t catch every little wiggle and you just have to wait out conta moves. Yesterday, the market was able to overcome record oil prices and a 1.1% spike in PPI. After early weakness, it was able to rally into the close. Intel raised guidance in the afternoon and that provided a boost to the entire tech sector overnight. The gross margins are expected to increase to 56% next quarter. This means that pricing pressure has abated.

This morning, J.P. Morgan, Washington Mutual, and Wells Fargo are all trading higher after their earnings releases. J.P. Morgan reported a 50% decline in net income and it posted EPS of $.68. Worst case scenarios are not playing out and banks have found support.

CSX handily beat expectations and it raised prices for rail shipping. That has the whole transportation sector trading higher this morning. Most shippers have been able to pass on fuel surcharges. Coca-Cola also beat estimates on strong international sales. Net operating revenue rose 21%.

On the economic front, the CPI came in at .3%, slightly less than expected. This was a major relief after yesterday’s hot PPI number and it gives the Fed some room to keep interest rates low. Housing starts were lower than expected, but analysts like the fact that this will ultimately lead to a reduction in inventory. Industrial production came in better than expected at .3% and capacity utilization was right on target. This afternoon, the Beige Book will be released and it will reveal regional economic activity.

In yesterday’s comments, I noted that there was a likelihood that earnings would be well received today. I have a positive bias going into tomorrow as well. After the close, IBM and eBay announce. IBM has held up well during the recent market decline and the expectations are high. They are likely to post in line numbers, but I don’t know that the stock will rally much after the news. A breakout above $120 could get this stock moving. EBay has moved well off of its $25 low in March and I don’t have much of an opinion. Sales have been soft, but PayPal has offset that weakness. Tomorrow, before the open, BK, HOG, IGT, MER, NUE, RS, SLM and AMTD announce earnings. The banking stocks have not disappointed and I don’t believe they will tomorrow. The steel producers are running higher and that should continue after they post big numbers.

The chance for an expiration related sell off is diminished. After today’s rally, we have moved back into the middle of the one-month trading range. Watch for additional economic news this afternoon when the Beige Book is released. It quite frequently has an impact on the market. Given today’s momentum, I believe it could act as an afternoon catalyst that pushes prices higher.

Overall, I see this price action as being very bullish. This is the second big gap up that we have seen from the SPY 132 level. That tells me that there is strong support building. Now that the double bottom has been established, the bulls are getting more aggressive and the bears are starting to cover short positions. Days like today are exactly why I have been telling you not too short the market. Maintained a “buy the dip” mentality and stick to commodity stocks. This approach will continue to serve you well. 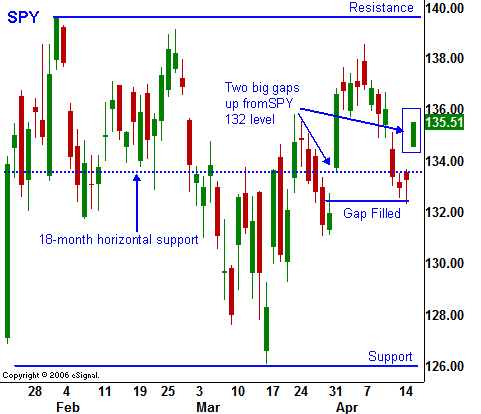