As expected, the market has been very quiet during this holiday shortened week. Yesterday, durable goods came in slightly better than expected, but that did little to excite the market.

This morning, the GDP was revised upward to .9% from .6% and the closely watched PCE deflator declined from 2.2% to 2.1%. While the PCE deflator is the Fed’s preferred inflation gauge, it does not include food and energy. This economic news gave the market a lift on the open. Initial jobless claims came in at 372,000 and the number was in line with expectations. The continuing claims stayed above 3 million and it reached its highest level in four years.

Sears posted a loss and same store sales were down 8.6%. This is the weakest retailer in the entire sector and I doubt they would make money if the economy were clicking along. Costco posted a 6% rise in same-store sales and profit jumped 32%.

Oil is finally starting to slow down and there is a chance that we have reached a temporary top. Many countries that subsidize oil are abandoning this policy. This financial drain is huge and the governments are ending this policy. This means that global consumption will go down as consumers can’t afford to pay “full price”.

Foreign markets are largely unchanged with the exception of a 3% rally in Japan. That move has negated losses from earlier in the week and the Nikkei is essentially flat over the last five days.

Oil inventories came in lower than expected and so did gasoline. The oil rally is stalling and if it is close to peaking, speculators could start dumping positions. Many analysts are blaming the recent run-up on speculation, not fundamentals. If that is the case, prices will fall just as quickly as they rocketed. Personally, I believe the long-term fundamentals are intact and that a $15 pullback would flush out the speculators. During summer months, peak demand will keep prices above $115. Meteorologists are forecasting a severe hurricane season and energy prices will carry a risk premium.

The futures are rallying this morning and the A/D is a positive 3:2. Mildly positive economic news (durable goods, GDP) and lower oil are providing a spark. This rally feels like it will hold, but I’m not expecting big gains. The SPY 138 support level was successfully tested. End-of-month buying is also pushing prices higher.

Trading is choppy and the volume is light. These moves are nothing more than daily “noise” as the market searches for direction. Keep positions small and stick with OTM call credit spreads on weak sectors. 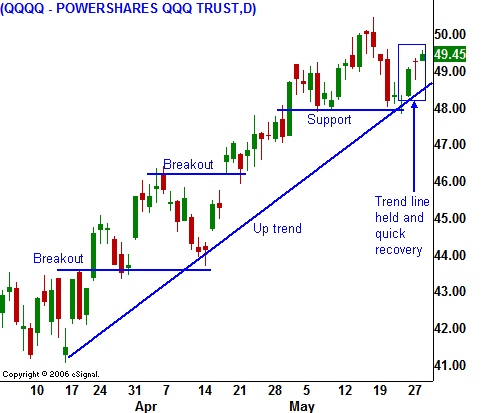