The Market Could Attempt A Breakout Next Week.

After challenging major resistance at SPY 144 two weeks ago, the market pulled back 4.5% heading into the holiday weekend. When trading resumed this week, the market regained its footing. Minor horizontal support held at SPY 138.

The economic news this week has been generally positive. Durable goods orders came in better than expected and excluding transportation they were up 2.4%. The GDP was revised upward from .6% to .9% and the price deflator (which does not include food or energy) was revised downward by .1%. Initial jobless claims came in at 372k, which was in line with expectations.

Next week, normal trading should resume and there will be many new pieces of economic data for the market to digest (ISM manufacturing, ADP employment index, ISM services, crude inventories, initial jobless claims and the Unemployment Report). Four weeks ago, ISM manufacturing came in at 49 and the ISM services number was over 52. A number above 50 indicates expansion. The initial jobless claims numbers have been stable the last three weeks and I am expecting a positive reaction to the Unemployment Report. Last month, the market rallied 30 points (S&P 500 futures) on the number. My only concern is that continuing unemployment claims have risen above 3 million and they stand at a four-year high.

Retail earnings were mixed, but generally positive this week. As the tax rebate checks are received, this sector could get a temporary booster shot. There are not any major earnings announcements slated for next week and the market will take its direction from the economic data and oil prices.

This week, oil inventories dropped much greater than expected. You would expect oil to rally on the news, however, it plummeted more than $4. If oil has formed a top, the market will have a catalyst. There are signs that demand could be slowing in the coming months. MasterCard showed that gasoline sales were down 5.5% over Memorial Weekend and demand has fallen for 5 consecutive weeks from last year’s levels. Many countries that subsidize oil have abandoned this practice because of the high cost. This means that consumers will be forced to pay higher prices and they are likely to cut back. Many analysts are blaming speculators for the high price of oil. If that is the case, oil will fall just as quickly as it spiked. I believe that oil has reached a temporary resistance level and that a $15 pullback is possible. However, I feel that the long-term fundamentals are intact and that any decline will set up a buying opportunity.

The market is clearly searching for direction. I like the fact that tech stocks have been leading the way higher. Financial stocks are reaching very compressed levels and they are drifting towards the March lows. I am not bullish on financials, but I feel that they will not weigh the market down as they have in the last six months.

The short-term up trend during the last two months has been strong. Today, end-of-month buying is moving the market higher. There are enough “positives” for the market to challenge SPY 144 next week, but it will take an incredible round of economic news and a big decline in unemployment to push it through that level. I want to see how the market reacts as is gets close to that resistance level. If it gets slapped down, that resistance will hold this summer. If the market creeps up to it and holds, we might break through soon.

The Fed will not meet for another month and interest rate chatter has been relatively light. As inflation continues to rise, they will be forced to to raise rates and that will keep a lid on this rally. A round of mortgage resets will hit in June/July and that will weigh on the market. in August/September. 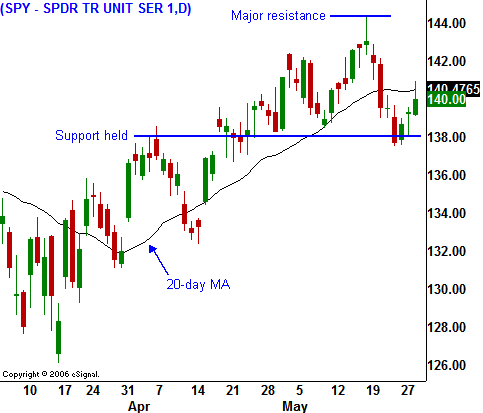