Look Out Below – High Oil, Rising Interest Rates and Unemployment Signal Trouble Ahead.

My forecast this week hasn’t been perfect, but it’s been pretty accurate. I have been looking for strong economic news to rally the market. That started to unfold early in the week and then the rating agencies downgraded financial stocks. That kept pressure on the market until Thursday.

Yesterday, the initial jobless claims came in better than expected and the market staged a huge one day rally. I mentioned that the Unemployment Report would generate a rally but that most of the move had taken place after the big run on Thursday. I did feel that the rally would be tradable, but I said I would not be trading it. As a trader you always have to leave room for error in your analysis and I felt much stronger about a market pullback than I did about a potential rally today.

If you look at today’s chart you can see all of the warning signs that have been building over the course of the last three weeks. There are an increasing number of big down days and the horizontal support level at SPY 138 and has been tested with greater frequency. The up trend line that dates back to March has also been breached. We finally get a nice one-day rally yesterday and almost immediately, those gains have been erased.

I have also been describing the interest rate scene. The Fed has been “encouraging” brokerage firms and banks to secure capital. They are going to have to increase interest rates in the near future to fend off inflation and to stabilize a falling dollar. Yesterday, the ECB indicated that their next move would be higher and that has crushed the dollar in the last two days.

This morning, the unemployment rate made its biggest jump in 22 years and it is at a 3 1/2 year high. The jobless rate rose to 5.5% last month, up from 5%. This development is very concerning. As long as people held their jobs, they could continue to finance their high debt levels. As the employment situation worsens, the number of foreclosures and credit card defaults will rise. In June and July we will have another round of mortgage resets and the combination of higher interest rates and fewer jobs could be devastating.

This morning, Israel said that an attack on Iran’s nuclear facilities might be inevitable. In reaction to the news, oil prices surged six dollars and they are right up on their 52-week highs. Higher oil prices will only add to an already weak economic environment.

Yesterday, Wal-Mart released decent earnings and they stated that they have cashed many tax rebate checks. Once this stimulus flows through the economy, I believe retail stocks will decline.

My strategy of choice continues to be the sale of OTM call credit spreads. That strategy has worked out well and I plan on adding July positions right now. Today’s news has shifted my market bias from neutral to mildly bearish and I might consider buying a few puts. I have also been stressing that positions need to be small in this choppy market. I feel the likelihood of a rally through resistance is very small at this stage.

For today’s, I believe the market will continue to drift lower throughout the day and there is a good chance it will close on its low the day. Things could get ugly and if it closes below SPY 138, next week will start off on a negative note. 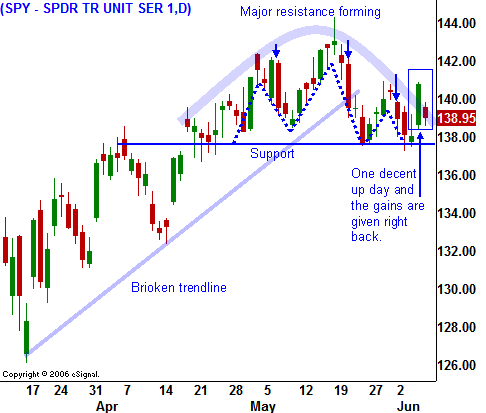