The Market Is Ignoring A “Hot” PPI – For Now. Be Patient and Sell Rallies.

Yesterday, the market tried to claw its way higher for most of the day. As it reached for SPY 138, it will hit strong headwinds.

This morning, it looked like a nice rally was about to unfold and the S&P 500 futures were 10 points higher on the opening bell. Goldman Sachs posted better than expected earnings and the stock shot higher. Much of that news was already factored into the stock and it has rallied nicely the last few days. After 90 minutes of trading, the stock is up one dollar and it has given back much of its early gains. This is the strongest investment banking firm on the street and it is not representative of the entire group. Tomorrow, we will see how well Morgan Stanley performed.

The PPI came in much “hotter” than expected. Producer prices rose 1.4% when a 1% increase was expected. If you strip out food and energy, the core was up .2%. The market has been able to shrug off inflation. Personally, I believe it is just a matter of time until the core starts heating up. England reported much higher than expected inflation and global interest rates are on the rise. That will place additional pressure on the FOMC next week. I don’t believe they will raise rates, but their rhetoric will prepare the market for future rate hikes. There are many mortgage resets that are taking place over the next few weeks and the Fed will want to evaluate the impact before they make a decision.

Industrial production fell by .2% in May when economists had been expecting a .1% rise. Manufacturing output was unchanged and industry capacity and fell to 79.4%, the lowest since September of 2005.

There seems to be a bid to this market and quadruple witching might push it higher this week. We are rallying from an oversold condition and that could take a few days to work off.

The news today was rather negative. I am positioning myself to “sell the rally”. I am distancing myself from the action by selling OTM call credit spreads. I am not overly aggressive at this stage, but as the market continues to rally I will add to current positions. First of all, I want to see how much resistance there is at SPY 138. That was a prior support level and now it is resistance. If the market backs off every time it gets near, I will start selling calls spreads. If it moves up to that resistance level with ease and it breaks out, I will hold off and I will start selling calls spreads as the market stalls around the SPY 142 level.

Higher unemployment, high consumer debt levels, inflation and rising interest rates do not bode well for the market over the coming months.

Today, the A/D is pretty flat and I believe the market will try to rally. It will struggle to get back to the intraday highs from the open. 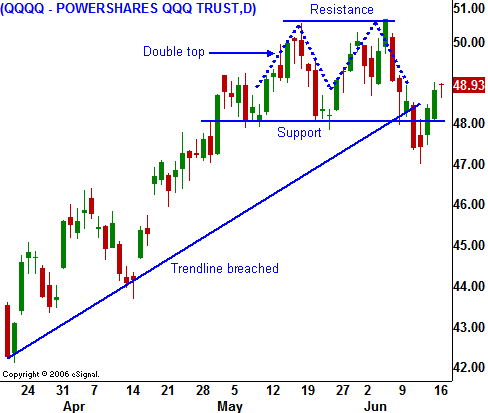