Option Traders Will Error On The Side of Caution and They Will Sell Into The Bell.

After taking a vacation, I am in the discovery phase of my market analysis. Consequently, I want to start off with a macro picture.

I did not expect any dramatic long-term changes in the last week and a half. In the chart you can see the negative developments from a technical standpoint. The market has broken a five-year up trend line, it has formed a head and shoulders pattern and it has broken below the neckline. The VIX is moving higher and uncertainty is priced into the market. On a long-term basis, my bias is bearish.

From a fundamental standpoint, the earnings over the last week and a half have been more positive than negative. Durable goods came in better than expected, new home sales were better than expected and the ADP employment index showed 9000 new jobs when a loss of 60,000 was expected. I am very skeptical of the ADP index since it tends to overstate employment. That became evident when the jobless claims number was posted today. Initial claims rose to 448,000 when 395,000 were expected. The continuing unemployment claims rose to 3.24 million. GDP came in at 1.9% when 2.3% was expected. Positive growth is still positive growth and I believe the key this morning was the unemployment scene. Early pre-open gains were reversed after the release.

Tomorrow, all eyes will be fixed unemployment rate. If it continues to creep higher, the market will have a negative reaction. High debt levels and rising unemployment are a lethal combination. The ISI manufacturing number will also be released. Last month, it showed better than expected gains. By comparison, it won’t carry the same weight.

Another big event lies ahead next week when the FOMC releases its statements. They have already voiced their commitment to helping financial institutions and to supporting the economy. Falling energy prices will fortify their stance since inflation might be slowing down. Consequently, I see the FOMC as a positive event.

The market is trying to find support at this level. SPY 126 is a horizontal support level and it represents the double bottom that was formed in March. Bears are not as aggressive as they were a few weeks ago. However, the bulls have not been able to get anything going either. I expected a small bounce to an oversold condition last week, and that rally faded quickly. Given the fall in energy prices, I expected to see a more positive reaction.

I still favor the short side and I am in a “sell the rally” mindset. Tomorrow’s number will be pivotal on a short-term basis. If employment stabilizes, the shorts will get squeezed and SPY 126 will hold (for now). If unemployment continues to rise, the market is likely to start its next leg down.

For today, the tone has been set. Traders would rather error on the side of caution and they will sell ahead of tomorrow’s number. I believe the market will drift lower right into the closing bell. 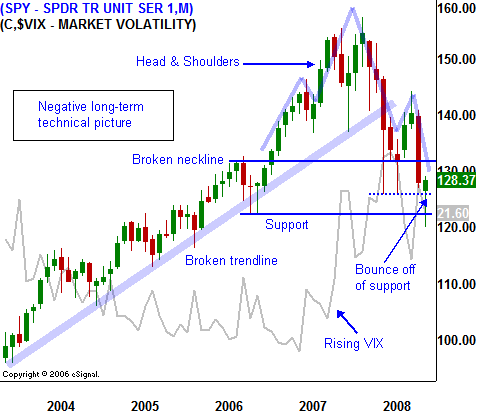