An FOMC Rally Might Present A Shorting Opportunity Next Week!

The market is in a very volatile mode and daily triple digit swings are common for the Dow Jones Industrial Average. Surprisingly, these moves have not resulted in a net change over the last two weeks. The market is trying to establish support at the double bottom low formed in March.

From a technical perspective, the long-term picture is very weak. A 5-year chart of the SPY shows that the long-term up trend line has been breached, we are below the 200-day moving average, and we have broken the neckline of a head and shoulders formation. On a short-term basis, the SPY 126 level is holding and bears are less aggressive than they were a few weeks ago. Oil has pulled back significantly and I expected to see a nice bounce from an oversold condition. However, the bulls were not able to capitalize on the situation and that is negative.

From a fundamental standpoint, almost all of the earnings are in and they are down 20% on the S&P 500 compared to the same quarter last year. General Motors reported a $15.5 billion loss in the last quarter and their bonds are trading at less than $.50 on a dollar. This is a psychological blow to the country and our largest car manufacturer is in danger of going under. International companies that were benefiting from global growth reported signs of strain and the guidance was cautious. Economic conditions continue to deteriorate and the unemployment rate hit a new four-year high of 5.7% today. We lost 51,000 jobs in July and that was less than the 75,000 number analysts had expected. May and June’s numbers were revised and there were actually 26,000 more jobs than initially reported. All things considered, this was a very weak number. As more people lose jobs, they cut consumption and the problem spreads. High debt levels will complicate the situation and the credit crisis will worsen.

Next week, the FOMC will meet. They have already stated that the economy and the financial crisis are their priorities. Lower energy prices will ease inflationary pressures and the Fed will be able to postpone interest rate hikes. They are out of bullets and traders were concerned that they would have to raise rates to prevent a collapse in the dollar. Interest rates around the world have been moving higher and the Fed was really painted into a corner a few weeks ago when oil was making new highs and the PPI was surging.

On a short-term basis, the market is hanging on to the SPY 126 support level. Last week, the market tried to rally through 126 and it failed to follow through. The oversold condition and lower energy prices should have sparked a short covering rally and the move should have lasted longer than it did. From my perspective, this was a very negative development and it tells me that the sellers are ready to unload stock. End-of-month fund buying and takeover news has helped it to tread water this week.

From a long-term perspective, conditions are deteriorating and I believe we are consolidating before the next leg down. If we get a decent FOMC rally next week, I will be looking for opportunities to get short. I do not believe the market will be able to get through SPY 133. 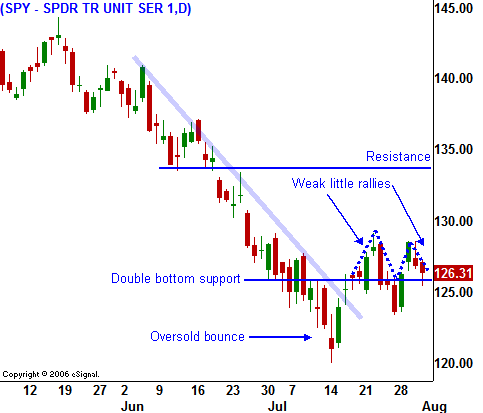