The market continues to chop back and forth on a daily basis. Last Thursday’s big gains were erased Friday as hurricane Gustav set its sights on New Orleans. News of John McCain’s VP selection also surprised the market ahead of the holiday weekend and traders sold into the uncertainty.

This morning, the clouds have parted and the market is rebounding. The hurricane damage was contained and oil rigs/refiners should be back online quickly. Consequently, oil is down almost $7 and commodity stocks are getting pounded. I believe this reaction is a bit overdone. Three new tropical storms are forming in the Atlantic and Russia still has the potential to disrupt energy supplies from Georgia.

On the financial front, it has been confirmed that Korea Development Bank is in talks with Lehman. A takeover would relieve some of the anxiety in the financial sector. Decent Fannie Mae/Freddie Mac auctions also stabilized financial stocks last week.

This morning, ISM manufacturing came in as expected at 49.9. US factory activity fell slightly, but so did inflationary pressures.

Easing oil prices could stimulate the economy as consumers shift their spending. Retail stocks are moving higher as a result.

This Friday’s Unemployment Report will determine the market direction for the next two weeks. As you can see in the chart, an ascending triangle has formed. The market will either breakout above SPY 130, or it will breach the trend line and test support at SPY 126.

If we do not get a big reaction, I fear that we could be setting up for a prolonged trading range. We are two months from the presidential election and at this stage it could swing either way. There is a lack of transparency in the financial sector. We are still in a discovery phase and no one knows if the second shoe is about to drop. The possibilities range from a broad-based financial collapse to the bargain of the century. As each new piece of information is digested, the market will react. Eventually, one side or the other will prevail and we will see a prolonged directional move.

Until then, I would avoid large positions. Day trading has been very successful since the early momentum has continued throughout the day. However, you need to close out positions because the overnight risk is too great. Stocks that were up big the prior day lead the market lower the next. Expect this type of price action the rest of the week as traders return from vacation. 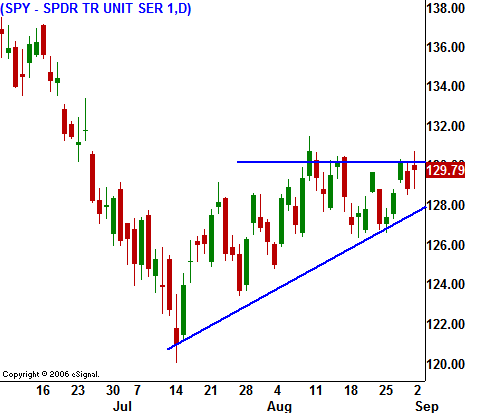